Recent release “AC” from Page Publishing author Alan Lieberman is a riveting coming-of-age tale of first love, a ruthless organized crime syndicate, and a brutal triple murder in the shadows of the storied Atlantic City Boardwalk. Follow Jake Harris as he meets and loses the girl of his dreams in the wake of a gruesome tragedy in the summer of 1962, then reconnects with her years later while investigating the origins of three long-buried corpses found beneath the ruins of a once-grand hotel. 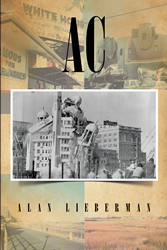 Alan Lieberman is a former federal prosecutor who investigated major cases of public corruption and mob-related crimes. He is now working as a trial lawyer specializing in white-collar defense. In his spare time, Alan is a pilot who flies abused dogs rescued from quick-kill facilities to loving homes up and down the I-95 corridor. This Atlantic City native has published his new book “AC”: a spellbinding and masterfully crafted murder mystery that keeps readers turning the pages until the dramatic conclusion.

Atlantic City’s golden age has ended. Once known as the Queen of Resorts frequented by genteel and wealthy members of Philadelphia’s leading families, AC had become a summer-long hustle of gypsy fortune-tellers, auction clip joints, and seedy arcades. The town is in the grip of corrupt public officials and organized crime. The passage of casino gambling has ignited a frenzy of greed. Politicians, the mob, and real estate speculators gather like a flock of vultures picking clean the bones of a carcass. One-by-one the grand hotels along the boardwalk are demolished. The discovery of three skeletons buried in the mud walls beneath the rubble of the Marlborough Blenheim Hotel catapults Jake Harris, an A.C.P.D. detective, back in time to a long-ago summer.

It is the summer Jake falls in love with Michelle Nardo, a dark-haired beauty from Ducktown whose life circumstances are alien to his own. Together they imagine their life together in a different, happier place. Their dream is shattered when Joey Nardo, Michelle’s troubled older brother, commits a gruesome murder that sends him to a prison for the criminally insane, and drives Jake and Michelle apart.

Seventeen years later, Jake’s pursuit of the killer, or killers, of the victims found buried in the tunnel reunites him with Michelle. His connections to Michelle, and to the Ducktown boys he ran with as a teenager mean he must choose between a cover-up and justice. Risking his career and his freedom, Jake follows the trail of evidence as it twists and turns through a labyrinth of mob killings and corruption. As he attempts to salvage the life he once dreamed they would share, he must confront the horrific events of that summer, and in the process learns the terrible secret Michelle kept from him.

“AC” is a heartfelt homage to a hometown under siege, a coming-of-age story fraught with violence and insurmountable obstacles to first love—and, a tale of murder, corruption, and greed. Lieberman brings to his readers the profound importance of roots—both of place and family—to who we are and who we become. Perfect for those with memories of pre-casino Atlantic City, “AC” will be enjoyed by everyone whose hometown lives in their hearts.
Published by Page Publishing, Alan Lieberman’s engrossing book weaves a compelling murder mystery, a heartbreaking romance, and a suspenseful tightrope walk between corruption and justice in a gripping and potent work to enthrall any avid fiction reader.
“Alan Lieberman’s novel brings the same sort of literary excitement and mystery to Atlantic City that Dennis Lehane brings to Boston.”
-Dan Pope, author of “Housebreaking” and “In the Cherry Tree”.

Readers who wish to experience this engaging work can purchase “AC” at bookstores everywhere, or online at the Apple iTunes store, Amazon, Google Play, or Barnes and Noble.