Recent release “The Civilized Rats” from Page Publishing author Amaefule Patrick is a riveting fantasy introducing a colony of rats who, influenced by Nunuto the city rat, decide to emulate the characteristics of human society. 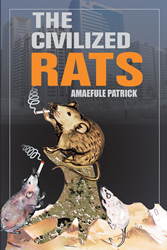 Amaefule Patrick is a writer who graduated from the Department of Theatre Arts of the University of Jos Plateau State, Nigeria, and hails from Imo state in Nigeria, where he lives. He has published his new book “The Civilized Rats”: a thought-provoking metaphor for the dark side of human civilization.

“The Civilized Rats” is a novel that tells the story of a tribe of rats that came together to establish an organized humanlike society under the inspiration of Nunuto, the city rat. In one of their annual tribal gatherings, they adopted the idea and started a kingdom of rats modeled along that of humans.

The civilization, as they called it, blossomed.

Under the inspirational Nunuto, the rats raised and trained an army that they named ratmy. They attacked humans, killed a snake, killed a cat, and chased away another deadly snake that swallowed rats.

However, when Nunuto died of a snakebite, there arose a leadership crisis in the ratmy. This led to the breakup of the kingdom as intractable civil wars set in. Splinter ratmy groups emerged here and there and went violent. Societal problems like violence, stealing, robbery, rape, murder, wars, banditry, looting, fights for supremacy, and other problems akin to those found in human societies set in.

The disunity among rats became worse than it was at the beginning. The kingdom collapsed, thus ending their dream of an organized society.

One comes to the last but very brief chapter, only to discover that the entire story was a mere dream by an overfed rat that fell asleep in a kitchen.

Readers who wish to experience this engaging work can purchase “The Civilized Rats” at bookstores everywhere, or online at the Apple iTunes store, Amazon, Google Play, or Barnes and Noble.