‘Buck’ by Shirlee Lawrence-Verploegen is a fun, heartfelt tribute to a courageous, special pet 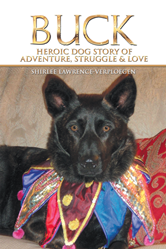 For many rescue dog owners, the history of their beloved pet prior to adoption is shrouded in mystery. They may have a few details—birthplace, exact age, reason for being turned over to a shelter—but the rest is unknown, prompting owners to fill in the blanks themselves.

In her novel “Buck,” Shirlee Lawrence-Verploegen pays tribute to her own rescue dog by imaging the two years of his life before she rescued him from the devastating aftermath of Hurricane Katrina. Starting in Louisiana and moving through the rest of Mississippi, the book follows Buck as he becomes separated from his family and overcomes unimaginable obstacles to find his forever home, meeting a multitude of memorable characters along the way.

“I adopted a dog from a dead-end street in Wiggins, MS, who had gunshot wounds in his back and was full of heartworms,” said Lawrence-Verploegen. “He became a beloved companion of mine for 16 years, but I always wondered about his past before I found him. I created this fictional approach to Buck’s past, giving him a heroic story as he had been my hero for so long.”

“Buck” also honors the rich history of the South and brings to light the tragedy that Hurricane Katrina left in her wake. Through the book, Lawrence-Verploegen raises awareness for the hardships that families affected by this disaster endured as well as the difficult sacrifices they were forced to make, including leaving their pets behind.

An entertaining, heartwarming story about one dog’s journey to survival, “Buck” is a reminder of the heroic nature of dogs and the endless love and joy they bring to the lives of everyone they meet.

About the author
Shirlee Lawrence-Verploegen is an author, animal advocate and retired director of retail for a large entertainment company. She frequently volunteers at animal shelters, fosters homeless animals in need and does pet therapy with shelter dogs in retirement communities. She was part of the first group to be educated by the Red Cross on how to set up pet shelters alongside Red Cross shelters after emergencies. Additionally, she has attended workshops and classes on animal behavior and done obedience training through the American Kennel Club. Lawrence-Verploegen has authored three other books, including “Wiggins, A Katrina Love Story.” She currently lives in Mt. Juliet, Tennessee, with her two dogs and foster cat.