Peace Activist and former missionary Steve Slocum, author of “Why Do They Hate Us? Making Peace with the Muslim World”, sets out to tackle Islamophobia and shed light on the peaceful Muslim mainstream through his new book and nonprofit, SalaamUSA.org, as politicians stoke fear of Muslims and immigrants in advance of the 2020 elections. 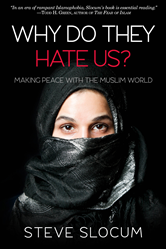 Peace activist and author, Steve Slocum, (http://www.steveslocum.com) recently released his book “Why Do They Hate Us? Making Peace with the Muslim World”, challenging Islamophobia and encouraging readers to see through rising anti-Muslim sentiment in the U.S., to rave reviews. Ironically, the same day, Congressman Duncan Hunter (R-50) sent an Islamophobic mailer stoking voters’ fear of Muslims, underscoring the timeliness and need for the book.

"In the wake of recent attacks on places of worship around the world, even in my hometown, I knew my book was timely," said Slocum. "But the irony is beyond bitter for the Muslim community of San Diego that Hunter's Islamophobic mailer was received on the same day that my book about friendship with Muslims was released."

Slocum is an outspoken peace activist, the founder of the nonpartisan, nonreligious nonprofit, http://www.salaamusa.org and former Christian missionary, on a mission to build bridges between faiths and cultures. He begins a North American book tour this month, traveling up the Pacific Coast to Canada, speaking and sharing his message of peace and denouncing Islamophobia as a political weapon. For a schedule of appearances, go to http://www.steveslocum.com/calendar.

Todd H. Green, author of The Fear of Islam: An Introduction to Islamophobia in the West, said of Slocum's book, “(It) is a helpful blueprint for how to build and maintain peace between Muslims and majority populations in the West. In an era of rampant Islamophobia, it's essential reading.”

Five years as a Christian missionary in Kazakhstan was a game changer for Slocum, altering forever his view of Muslims and his understanding of Islam. Today, with anti-Muslim sentiment at an all time high, Slocum is on a mission to challenge the fear mongering of Islamophobia by shedding light on Islam’s peaceful mainstream. By taking the spotlight off the extremists, Slocum instead exposes the heart of the everyday Muslim and clears up common misconceptions about jihad, Sharia law and the role of women in Islam. He also offers a fact sheet on his website, "Ten Things I Thought I Knew About Islam, But Was Wrong".

"Why Do They Hate Us?" (Top Reads Publishing) is sprinkled with stories from the lives of everyday Muslims and anecdotes from Slocum’s time in Kazakhstan, allowing the reader to catch a glimpse of a different side of Muslims than portrayed in the media.

When Slocum returned from his missionary work in 1997, he resumed his engineering career, but became uncomfortable with the growing animosity towards Muslims.

“When 9/11 happened, just like everyone else, I was traumatized,” said Slocum. “But my experiences in Kazakhstan kept me from giving in to a blanket fear of all Muslims. At the same time, I was just as clueless as everyone else about why Islamic radicals would fly packed airliners into the World Trade Center towers."

After 9/11, the world became more fearful of Muslims. The current political climate has only exacerbated the issue, culminating in the rise of horrific hate crimes like the New Zealand Mosque shooting.

“I believe many Americans have never healed from the trauma of 9/11. Others have misconceptions about Islam fed by media coverage of extremists,” Slocum added.

Slocum warns that the 2020 elections will see even more Islamophobic campaign rhetoric, like President’s Trump’s ongoing attack on the four freshmen Congresswomen known as “The Squad” and Congressman Hunter’s recent mailer. The campaign piece drew widespread backlash, showing Rashida Tlaib and Ilhan Omar - the only Muslim members of the House - and Hunter’s opponent, Ammar Campa-Najjar, saying, “These three radical Democrats want you to forget their Anti-Semitism or Terrorist Ties.”

“Candidate Campa-Najjar is Christian, but his appearance and last name make him an easy target for the Islamophobia tactic,” added Slocum.

Slocum contends that the Islamophobia tactic is effective and played a key role in putting Trump in the White House. In fact, he contends, there is a multi-million dollar Islamophobia industry at work.

“It is the brainchild of behind-the-scenes right-wing think tanks who realized they could capitalize on America’s 9/11 trauma to win elections. Hundreds of millions of dollars go into these mis-information centers so they can pump out carefully crafted messaging to incite fear and influence voters.”

“Islamophobia is a present and rising force in the West,” said D. Donovan, Midwest Book Review. “(Slocum) takes a stand against this prejudice by advocating a different approach to not just tolerating Muslims, but getting to know them on a personal level. In this case, familiarity does not breed contempt. It leads to understanding.”

However, according to SalaamUSA, many Americans say they don’t even know a Muslim, and 55% say they know “little or nothing” about Islam. “In this void, Americans’ opinions about Islam are shaped by the media, political rhetoric, and religious bias, and racism,” said Slocum.

The solution, says Slocum, is calling out Islamophobia, dispelling the myths about Muslims and Islam, and encouraging face-to-face interaction.

This personal interaction across cultures and faiths is the crux of Slocum’s work with SalaamUSA. From awareness events, to mosque visits, to face-to-face friendship dinners and discussion groups, Salaam’s programs help fight fear with friendship.

“Since people fear what they don’t know, we create curriculum and hold workshops that help people better understand Islam's peaceful mainstream – rather than the extremism that dominates the headlines,” Slocum said.

“There could have been no better timing for the appearance of “Why Do They Hate Us?” than in these modern times,” added Midwest Review’s Donovan.

"Why Do They Hate Us?, Slocum's debut book, is receiving critical acclaim from the trade media and scholars alike, several calling it ‘essential reading'.

Dr. Craig Considine, Department of Sociology, Rice University said, “This book is an important antidote to the rising anti-Muslim sentiment in the U.S. and beyond. It will appeal to those who are seeking the truth about the Islamic faith and those who are hoping to liven their spirit by reading the work of a committed bridge builder.”

I found it to be captivating, full of important information, relevant to every American,” said Safi Kaskas, author, The Qur’an - A Contemporary Understanding.

About Steve Slocum:
Steve Slocum, author and peace activist, founded SalaamUSA.org with the goal of creating friendship between Muslims and non-Muslims. Motivated by his experience as a missionary in Kazakhstan, Slocum wrote Why Do They Hate Us? Making Peace with the Muslim World to counter rampant Islamophobic political rhetoric and give a voice to Islam’s peaceful mainstream. Through SalaamUSA and his new book, Slocum hopes to fight the fear, prejudice, and violence surrounding Islamophobia. He is an ambassador for the Parliament of World Religions and a presenter at the 2018 Parliament in Toronto. He is a frequent keynote speaker and media expert based in San Diego.

About SalaamUSA.org:
SalaamUSA.org is a non-profit organization that focuses on creating mutual understanding between Muslims, Christians, Jews and the non-religious. Salaam uses events, community outreach and media to raise awareness of Islam from an unbiased, non-religious, nonpartisan perspective.

10 Things I Thought I Knew About Islam...