Recent release “War on the Beach with Wall Street” from Page Publishing author Andrew Neff is an insightful view from inside the financial services industry at the myriad causes of the devastating collapse of the banking sector that led to the Great Recession and the massive losses sustained by investors who fell prey to fraudulent pyramid schemes. 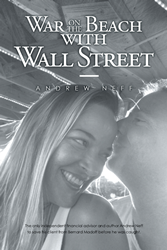 “War on the Beach with Wall Street” is a look back to late 2007 through the end of 2009, at the time of the largest financial market crash since the 1929 Depression, "The Great Recession." This book is about Florida financial adviser Andrew Neff, who had recently acquired a new widowed client. This was not just any client; her deceased husband, who was killed in a Ferrari car wreck in late 2003 (which was not investigated for foul play), had recently sold two riverboat gambling casinos for $179 million. He also owned and ran one of the largest and most successful road construction companies in the country at that time.

Andrew Neff identified and understood that all the signs of a serious market implosion due to the repeal of the 1933 Glass-Steagall Act, approved by US Congress and signed into law by then President Bill Clinton in late 1999, and the Federal Reserve aggressively raising interest rates into this economic environment, surely spelled economic disaster for the US and world markets.

This real-life financial white-collar crime thriller takes any reader through the complicated maze of helping a wealthy widow comprehend what was about to happen in our economy, but also enabled the client to avoid $20 million dollars of potential market losses right before the crash. But that's not the best part of this story. Read on as Mr. Neff’s discovers irregularities in his new client’s financial records and saves her from massive losses months before the Madoff Ponzi scheme was uncovered.
Published by New York City-based Page Publishing, Andrew Neff’s engrossing book is an eye-opening glimpse of the American financial system in the first decade of the twenty-first century.

In light of the humanitarian crisis in the Northern Bahamas, Author Andrew Neff has made the decision to donate a portion of the proceeds of every book sale to the Bahamians who endured Hurricane Dorian through the non-profit Operation 300's Treasure Coast - Abacos Relief Project.

Readers who wish to experience this engaging work can purchase “War on the Beach with Wall Street” at bookstores everywhere, or online at the Apple iTunes store, Amazon, Google Play, or Barnes and Noble.