“Blind Visions from Heaven (Based on a True Story)” from Christian Faith Publishing author Angela Rhodes-Parker is a beautiful and chilling novel that embraces the depths of grief and offers hope after the death of a loved one. 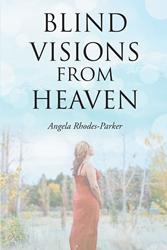 The author writes: “The devil slips in unbeknownst to those even closest to a person. They can live for years pretending to be God-fearing. They might attend church religiously, just for the appearance to their peers. They may live in a nice house and drive nice cars. That does not mean that in one instant, when they think that you are onto them and have seen the devil lurking in their eyes, he will not come out and try to harm you. You see, those with the devil in them certainly do not like God’s truths spoken. When you fight the devil, you are in for the fight of your life.”

Published by Christian Faith Publishing, Angela Rhodes-Parker’s new book is a thrilling spiritual novel about the continued presence of lost loved ones after death.

Compulsively readable and affecting throughout, this tale is one that’s sure to remain firmly imprinted upon the minds and hearts of readers many years down the line, and is that rare breed of novel that stirs and engages the soul as much as it does the intellect.

View a synopsis of “Blind Visions from Heaven” on YouTube.

Consumers can purchase “Blind Visions from Heaven” at traditional brick & mortar bookstores, or online at Amazon.com, Apple iTunes store, or Barnes and Noble.

For additional information or inquiries about “Blind Visions from Heaven”, contact the Christian Faith Publishing media department at 866-554-0919.