Author announces marketing campaign for ‘Until We Meet Again’ 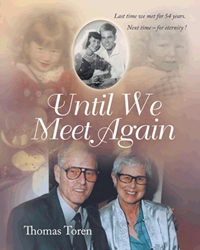 Author Thomas Toren’s debut book, “Until We Meet Again: Last time we met for 54 years. Next time – for eternity!” (published by Balboa Press AU), details the survival story of both the author and his wife, Lisa, who were alive during the Holocaust. Toren is launching a marketing campaign to expand the reach of his book. The book is available for purchase at: https://www.amazon.com/Until-We-Meet-Again-Eternity-ebook/dp/B07948RF76.

As a 5-year-old, Lisa escaped together with her parents from Danzig to Shanghai, her father’s, Dar Lee Dju, hometown, shortly before the outbreak of World War II in 1939. In 1945, Lisa and her mother were able to return to Vienna, her mother’s hometown, before they moved to Israel three years later.

At the end of 1938, Toren fled with his stepfather without visas to Japanese occupied Harbin, in the North of China. Toren grew up in the white-Russian community, which settled there during and after the Bolshevik revolution of 1917. He graduated from a Soviet Russian high-school at the top of his class, but he was not admitted to the Harbin University because he did not apply for Soviet Russian citizenship.

Toren shares meeting and marrying his wife as well as their immigration from Tel Aviv to Sydney in 1963. He also includes the births of their daughter, Iris, in Israel, and of their granddaughter, Laura, in Australia.

When asked about the relevance of his book now, Toren pointed to the Stolen Generations of Australian Aboriginal children, international racism and the current treatment of asylum seekers, saying that some of the central themes of his book “are racism, discrimination and persecution, all of which are prevalent in today’s world.”

About the Author
Thomas Toren was born in Berlin on January 1, 1931. When he was 6, his Christian mother was imprisoned by the Nazis in a concentration camp, and he did not see her again for 22 years. After the Crystal-Night Pogrom, he and his Jewish stepfather escaped to Japanese-occupied Harbin, China. Not being able to attend the Soviet Russian University in Harbin, Thomas Toren joined his Jewish step-father on his way to Israel, assisted by the United Nations, where he was able to enter the Haifa University, Technion, which he completed with distinction, without any financial assistance whatsoever.