Author Anthony G. Tennis’s new book “The Life of Raoul and the Death of Dr. Martin Luther King, Jr.” is a provocative theory of the assassination of an American icon

Recent release “The Life of Raoul and the Death of Dr. Martin Luther King, Jr.” from Page Publishing author Anthony G. Tennis is an exposé of his late grandfather’s research and conclusions regarding the identity of Dr. King’s true killer. Glen Tennis, born in 1915 on a small Oklahoma farm, enjoyed a successful career as an auctioneer before embarking on a twenty-four-year quest to unlock his stepson’s possible role in one of the most shocking assassinations in the history of the United States. 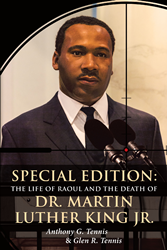 Anthony G. Tennis, a West Texas native happily living in semi-retirement by a lake in Florida, where he enjoys feeding the birds and working in his garden, has completed his new book “The Life of Raoul and the Death of Dr. Martin Luther King, Jr.”: a thought-provoking exploration of a little-known angle in the assassination of the American civil rights hero.

Anthony writes, “A conspiracy theory revealed. We all know that Dr. Martin Luther King Jr. was assassinated on April 4, 1968, in Memphis, Tennessee, by James Earl Ray. James wrote his book, ‘James Earl Ray, Who Killed Martin Luther King Jr.?’, declaring his innocence while in prison, claiming a man he knew only as ‘Raoul’ set him up to be patsy. He detailed his life with Raoul in his book.

Raoul’s real name was also James; they were both named James. You now have the chance to find out what really happened. You get to see the workings of a real assassination. Please pass this book to others as it could be considered history one day known by only a few.”

Readers who wish to experience this engaging work can purchase “The Life of Raoul and the Death of Dr. Martin Luther King, Jr.” at bookstores everywhere, or online at the Apple iTunes store, Amazon, Google Play, or Barnes and Noble.