Author Anthony Iacone’s new book “Jupe: A Dignified Life Cut Short” is the compelling biography of a talented and forever young member of a heroic generation

Recent release “Jupe: A Dignified Life Cut Short” from Page Publishing author Anthony Iacone is an evocative tribute to a World War II hero to preserve his memory, which may be fading, like so many across the decades, among the residents of the town both men called home. Although the talented and popular Jupe died before the author was born, he was inspired to explore the life and premature death of a local hero who made the ultimate sacrifice for his nation and make understanding the long-ago life of a fine young man a relevant and worthy pursuit for modern readers. 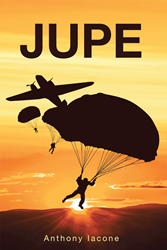 Anthony Iacone is a well-known county sports figure inducted into two local halls of fame for officiating, a highly successful youth basketball coach, and owner and president of s small life insurance and annuity brokerage firm currently residing with Lorraine, his wife of forty-two years, in Garnet Valley, Pennsylvania. He has published his new book “Jupe: A Dignified Life Cut Short”: a stirring work based on extensive research in the annals of the now-defunct St. James High School in Chester, Pennsylvania.

The author shares, “Jupe was a nickname bestowed on a larger-than-life individual by the name of John J. Judefind. He received that honor from his classmates. Jupe was a spectacular student/athlete who won a small, silver statuette as the first great athlete at his beloved school, St. James High School in Chester, Pennsylvania. He won All-Delco honors in football and earned a full scholarship to LaSalle College in Philadelphia even though baseball was his best sport. He was on the brink of becoming a major league player having been granted a well-earned tryout by the Philadelphia Athletics, when the surprise attack by Japan at Pearl Harbor changed his plans.

Jupe left LaSalle and joined the US. Army in November of 1942. An Army recruiter talked him into joining the Eighty-Second Division of the 508th Airborne Infantry Regiment, where he was promoted to the rank of platoon sergeant. Jupe soon showed everyone that he was a head above the crowd and was thought to be the poster boy for the 508. He jumped out of an airplane on D-Day and into the arms of history. He put his love of God, country, and the people who surrounded him ahead of his own dreams and aspirations. In this story, Jupe showed us what it was like to be a man of principle and integrity. Follow along on his journey that lasted just twenty-one years even though his connection to us has passed the realms of time.”

Published by Page Publishing, Anthony Iacone’s engrossing book is a fitting tribute to a gifted yet ordinary young man who heeded the call to serve his country and made an extraordinary sacrifice.

Readers who wish to experience this engaging work can purchase “Jupe: A Dignified Life Cut Short” at bookstores everywhere, or online at the Apple iTunes store, Amazon, Google Play, or Barnes and Noble.