Recent release “The Ghost People of the Everglades” from Page Publishing author Barbara Tyner Hall is the story of an adventurous family that turned to the illegal smuggling of marijuana after the fishing laws and regulations changed and took the majority of their livelihood away, making it harder from them to earn a living for the townspeople of Everglades National Park. 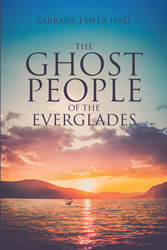 Barbara Tyner Hall is a mother of three grown children and an entrepreneur at heart who divides her time between Texas and Florida, where she writes full time. She has published her new book “The Ghost People of the Everglades”: a riveting true story chronicling the lives of impoverished fishermen who enter the stunningly lucrative business of marijuana smuggling in the labyrinthine waters of southwestern Florida.

The last frontier is no more. Commercial fishing has been banned in Everglades National Park, and the locals were forced to find other means of work, but no one expected drug-smuggling to become big business in a small sleepy fishing village with less than one thousand people in population called Everglades City, Florida, and an island called Chokoloskee.

The intertwined and dense mangrove system of the Ten Thousand Islands that surrounded the area and with remote locations provided a perfect environment for smugglers to bring and hide their drugs until they could deliver them for big profits.

The Daniels family knew the backcountry of the Everglades and the complicated waterways of the area and knew how to travel through the shallow and treacherous waters and go through other passages unknown to anybody else. The Daniels family were sought after and hired to bring in large loads of drugs from South and Central America, as well as a few other countries.

This family was born in the area and knew it like the backs of their hands. The Daniels crew was dubbed the “Saltwater Cowboys” because of their daring and reckless style and the “Ghost People of the Everglades” because they could disappear at a blink of an eye. Their wild and daring stunts happened on the high seas as well as in the complicated waterways of the Ten Thousand Islands. These boys could turn into a cluster of mangroves and disappear into another waterway just behind it.

This adventurous family that turned outlaw became the largest importer of drugs into the United States that ran throughout our country. This area was world-renowned to some of the largest cartels or drug-smuggling rings around today and now call Everglades National Park their home.

Published by Page Publishing, Barbara Tyner Hall’s engrossing book is a fascinating portrait of the Randal Daniels family, whose forbears were some of the original settlers in the Everglades City and Chokoloskee Island area of Florida.

Readers who wish to experience this engaging work can purchase “The Ghost People of the Everglades” at bookstores everywhere, or online at the Apple iTunes store, Amazon, Google Play, or Barnes and Noble.