Author Billy Moore’s new book “Until the Lion Speaks” is a powerful true story of tragedy, grace, and redemption for a young man on Chicago’s notorious South Side

Recent release “Until the Lion Speaks” from Page Publishing author Billy Moore is a moving and deeply personal reflection on his childhood, the devastating loss of his father from cancer, and his slide into the dark legacy of gang life. The fateful encounter that took one once-promising life and utterly derailed another ultimately leads him on an inspiring journey toward reconciliation and devotion to saving others from the same tragically common fate. 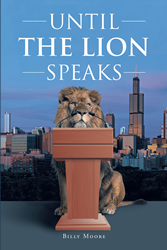 Billy Moore, an Illinois native raised on the South Side of Chicago who has dedicated his efforts to saving as many lives as he can since his release from prison in 2004, has completed his new book “Until the Lion Speaks”: a poignant comeback story and a searing commentary on poverty, race, and systemic failure in America.

“The tale of the hunt will always glorify the hunter until the lion speaks” is an African proverb. The premise of the proverb explains how people will glorify a story or create a narrative about someone that isn’t necessarily accurate or even make themselves look good. This is done only to create an attitude within people toward other people that they want to paint a negative point of view of.

This book was written to complicate the narrative of the story that sensationalized the confrontation of Ben Wilson and Billy Moore. Billy not only addressed just the confrontation on that unfortunate day but also set out to outline his pedigree, his upbringing, his experience in prison, and the work he had been doing since his release.

“Until the Lion Speaks” tells of the social landscape that defined Chicago in the eighties. Anyone who reads this book from Chicago growing up at that time will feel Chicago in every line. In fact, Billy Moore has made the city of Chicago as a separate character in “Until the Lion Speaks”! This is a comeback story, a story of redemption and reconciliation. Hopefully, the lessons that can be learned from “Until the Lion Speaks” will help young men develop the emotional skills to successfully get past those moments. When confronted with unfortunate circumstances, the lessons in this book can help them make better decisions so they can walk away to hopefully live their best lives!

Published by Page Publishing, Billy Moore’s engrossing book is a poignant true story of forgiveness and redemption on the South Side of Chicago.

“Billy Moore’s life story is one of the most powerful lessons in humanity I have ever known. Heartbreak and hope, rage and redemption, pain and purpose, fury and forgiveness, and war and peace.

"The early chapters of Billy’s life are beyond painful. The current chapters are beyond inspiring. And I have every confidence that the best chapters in his life are still to come.

"A warrior can be a warrior for many causes. We are so lucky that Billy is a warrior fighting to save the lives of our city’s young men. Tragically, no one knows better than him the staggering cost of gun violence to our families, our communities, and our city. We can’t win this war without him.”
-Arne Duncan, former Secretary of Education for the Obama administration.

Readers who wish to experience this engaging work can purchase “Until the Lion Speaks” at bookstores everywhere, or online at the Apple iTunes Store, Amazon, Google Play, or Barnes and Noble.