Recent release “The Mannington Globe” from Page Publishing author Blake Chenault is a gripping and potent novel introducing Denise Thomas, a gifted anthropologist on a mission to complete a controversial line of research before she was tragically killed. Her son, Rangel, is determined to carry on his mother’s work and makes an even more startling- and potentially deadly- discovery. 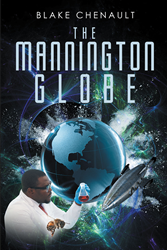 Blake Chenault is a retired news reporter who has lived all over the country over a twenty-five-year career covering a wide variety of human-interest stories. He has published his latest book “The Mannington Globe”: a spellbinding tale of scientific discovery, deadly intrigue, and an otherworldly intelligence.

“The Mannington Globe” is a science-fiction novel about a scientist who was killed before her controversial research could be published. She was murdered by the person who funded her project. Her son and husband are determined to finish her work and bring the killer to justice. But because her death was made to look like an accident, no one suspects the killer walks among them as a family friend.

She was a talented anthropologist whose work with a certain type of insect was applied to human behavior. Her thesis was sweeping and provided an explanation for large phenomena such was world wars, but it could also explain the single act of a lone murder. Her research had implications for every person on the planet.

As soon as her husband suspects who the killer is, he, too, has an accident, which leaves only the son to avenge their deaths. While bringing his mother’s work to fruition, the son tries to ignore the discreet hints that humanity is being evaluated by an inconspicuous entity that has chosen to contact him based on his mother’s research all the while as the killer closes in.

Readers who wish to experience this engaging work can purchase “The Mannington Globe” at bookstores everywhere, or online at the Apple iTunes store, Amazon, Google Play, or Barnes and Noble.