Author Bob Lewis’s new book “Kepler 42c: A New World, Another Home” is a post-apocalyptic fantasy centered on the struggle for life after widespread nuclear annihilation.

Recent release “Kepler 42c: A New World, Another Home” from Page Publishing author Bob Lewis is a futuristic nuclear thriller introducing a group of pioneers selected to journey through a ‘wormhole’ in space and time to colonize a distant planet 1,400 light years from earth. Join this intrepid team on their search for a new home for humanity after the cataclysmic destruction of planet Earth. 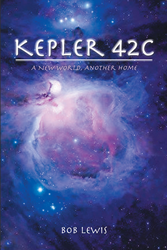 Bob Lewis is a former college professor and founder of a San Francisco-based publishing company. He retired to Utah, where he divides his time between writing and tennis, keeping a close eye on politics, and the search for the Higgs boson. Bob has published his new book “Kepler 42c: A New World, Another Home”: a suspenseful page-turner that keeps the pages turning until the stunning conclusion.

Lewis writes, “The dawn of death for planet earth began on a beautiful summer day in the middle of July in the late 21st century. Terrorists, from who knows where, succeeded in exploding a series of ‘dirty bombs’ in both New York and Washington. The great city was left little more than a pile of radioactive rubble. The nation’s capital, well, Washington just disappeared. Chaos seized the nation. During the widespread panic and confusion North Korea, led by an insane leader, succeeded in striking Northern California with a hydrogen bomb launched from a submarine. Some said it was aimed at Los Angeles, but the North Koreans were never very accurate. No one dreamed they could do it. Nobody devised any plausible reason why they should. But they did. The bomb struck just south of San Francisco. The result was catastrophic. There was no more Bay Area. The retaliation by the United States was swift and deadly.

In a matter of days North Korea was completely annihilated, leaving only a vast, lifeless wasteland. But how could a nation, even a powerful one, strike back against this invisible band of terrorists? They simply melted into the shadows, waiting patiently to strike again. Russia, China, and the United States cobbled together an uneasy treaty. Everyone agreed that further use of nuclear weapons would threaten all life on earth. But the damage had been done, horrible damage. Nuclear Winter was settling upon a slowly dying planet. Within three years the Russians had hastily established a lunar colony. It was the only place mankind could go to escape the horrors of a waning world. It was the only place, until now.”
Published by Page Publishing, Bob Lewis’s engrossing book is a riveting choice for avid science fiction readers.

Readers who wish to experience this engaging work can purchase“Kepler 42c: A New World, Another Home” at bookstores everywhere, or online at the Apple iTunes store, Amazon, Google Play, or Barnes and Noble.