Author Bob Whited’s new book “A History of Bridgeburg and Its People” is an honest look at the history of the small village of Bridgeburg, Pennsylvania

Recent release “A History of Bridgeburg and Its People” from Page Publishing author Bob Whited is a historical look at the small Western Pennsylvania hamlet of Bridgeburg, documenting the numerous families that first settled there, as well as how the Allegheny River and the subsequent building of a railroad bridge helped shape the town into what it is today. 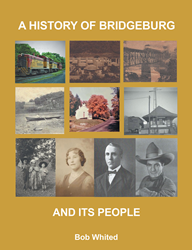 Bob Whited, a former enlisted Navy sailor, retired General Motors employee, and former columnist for the Warren (Ohio) Tribune Chronicle, has completed his new book “A History of Bridgeburg and its People”: a gripping and potent look at a small village.

Bob writes, “On writing a history of Bridgeburg, a small hamlet in Western Pennsylvania, Armstrong County, East Franklin Township, two features immediately emerge. They are the beautiful Allegheny River and the huge railroad bridge that spans the river from West Mosgrove/Bridgeburg to Mosgrove.”

Published by Page Publishing, Bob Whited's historical tale follows the origins of the small western Pennsylvania town of Bridgeburg, located in Armstrong County in East Franklin Township, and it details the history of how the town was founded, as well as how the construction of the bridge and railroad the town is named after helped shape what the small hamlet of Bridgeburg would eventually become.

The land that would eventually become Armstrong County was acquired during the tail end of the French and Indian war, and settlements began to form after the revolutionary war during the early 1800's, which was eventually made predominantly into farmland. by the late 1800's, the towns name was changed from West Mosgrove to Bridgeburg, more families began to settle in the area, and the famous railroad bridge that the town was named after was built in 1899; the town would finally begin to change into what it is today.

Readers who wish to experience this historic work can purchase “A History of Bridgeburg and Its People” at bookstores everywhere, or online at the Apple iTunes Store, Amazon, Google Play, or Barnes and Noble.