Recent release “Stuff We All Should Know” from Page Publishing author Brien Roche is a wide-ranging compendium of scholarship synthesized from a selection of The Great Courses, the series of university-level programs by the Teaching Company. From physics and economics to writing and world cultures, this work offers a wealth of knowledge that would be of interest to even the most casual reader. 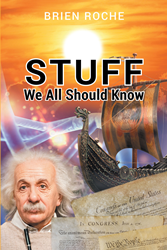 Brien Roche, an attorney practicing law in the Washington, DC area who has authored four books on Virginia law and resides with his wife in northern Virginia, has completed his new book “Stuff We All Should Know”: an educational work inspired by a desire to create a thought-provoking anthology of knowledge for his children, grandchildren, and the general public.

The author writes, “This book is a book of knowledge. It is not intended to go into depth in any one subject matter. Rather, it gives an overview of many different subject areas such as the sciences, history, philosophy and literature. With that type of an overview, one can then focus on specific areas of interest and make a decision either then to become a subject matter expert in a specific area or simply to broaden one’s knowledge in a multitude of areas.

The first part of the book deals with the basics. The basics are such things as physics, chemistry, biology, weather, the oceans, astronomy, the human body, language, writing and money. With an understanding of those basics, hopefully the reader will have a better appreciation of the interaction between chemistry, physics and biology. Hopefully the reader will have a keener appreciation of how weather, oceans and astronomy are interrelated. The reader will also have a better understanding of not only how the human body works but also how the human brain deals with language and has developed writing. Finally, as part of the basics there is a chapter that deals with the economy and how money works.

Part II deals with history and in particular the role of freedom. As one of the professors in this book states, the role of freedom is probably overrated in the course of human history. Many historians espouse the idea that all people crave freedom. Rather, what they really crave is order, food on the table, and a roof over their head. If they have those things, then they have the luxury of seeking to be free.

The final part of the book deals with specific people of the world including the Vikings, the Mongolians, the Chinese and many more.”

Published by Page Publishing, Brien Roche’s engrossing book is an excellent choice for lifelong learners of all ages.

Readers who wish to experience this engaging work can purchase “Stuff We All Should Know” at bookstores everywhere, or online at the Apple iTunes Store, Amazon, Google Play, or Barnes and Noble.