Recent release “Justice for Vietnam” from Page Publishing author Bright Quang is a captivating discourse on the effects of the Vietnam war on innocent people, himself included, who became prisoners of war. 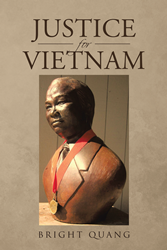 Bright Quang, a Vietnam native who appreciates arts and culture, has completed his new book “Justice for Vietnam”: an informative and passionate account of hos justice may be served after the bloody battles of the Vietnam war.

“The Vietnam War murdered three million innocent people. One legal government by the Vietnamese people voted and sold off the Vietnam Armed Forces to Mainland China, which have three million astute troops, and sent to jail one million Southern officers. And three hundred thousand Southern officers were killed without being sentenced. His fatherland had been destroyed for the natural resources and environment by the toxic chemicals. Significantly, his literature is mightier than the amoral war as it has altered his super sublime to enslaved guy. As a result, he must keep up the modern civilization of the world when he stood up with his strong legs and his sublime energy. Even good, Bright Quang has been published eighteen books in the English language. He has exhibited many pieces of artwork seven times in the US after he graduated with a bachelor in art and two years of nonprofit management. This accordance with a superpower, modern, civilized, and progressive let him struggle for justice as a prisoner of war because wisdom must win the inhuman war. The better struggle for equality rather than make an enslaved artist by the discrimination and racism in the United States of America.”

Published by Page Publishing, Bright Quang’s captivating tale shares his own experience as a prisoner of war through his creative outlet of writing as a form of cathartic self expression.

Readers who wish to experience this gripping work can purchase “Justice for Vietnam” at bookstores everywhere, or online at the Apple iTunes Store, Amazon, Google Play, or Barnes and Noble.