Author C.A. Gadsden’s New Book “Chat Unchained: A Wireless Love Story” Is a Thought-Provoking Tale Centered On and the Search for Connection in the Modern World

Recent release “Chat Unchained: A Wireless Love Story” from Page Publishing author C.A. Gadsden is a compelling novel introducing Nico Rush, a convict doing time in a Georgia prison, and Lisa Baptiste, a young nursing student seeking something more than the Orlando social scene seems to offer. When they are drawn to one another after meeting in an online chat room, each must decide how the other can fit into their separate lives. 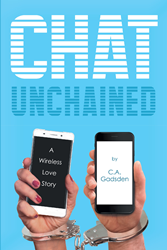 C.A. Gadsden, a South Carolina native currently living in Dacula, Georgia, with his wife, two dogs, three cats, and a snake, has completed his new book “Chat Unchained: A Wireless Love Story”: a timely exploration of the human need for connection and the hard realities of modern life.

Nico Rush is a handsome, charismatic, overachieving convict who was incarcerated before the invention of cell phones and held his first one behind prison walls. Serving a twelve-year-sentence in Georgia, he has experienced loss and wages a daily war to maintain not only his sanity but his humanity.

After a close friend and fellow inmate secures a staff member to supply and smuggle in illegal cell phones for distribution inside the prison, Nico finds himself reconnected with society and eventually, via chat line, meets an incredible young woman.

Lisa Baptiste is a beautiful young nursing student in Orlando, Florida. Despite her youth, she bears the burden of holding her family together while trying to forge her own future. When boredom and frustration with the Orlando social scene leads her to a chat line, her life takes a thrilling yet scary turn.

These star-crossed lovers find themselves facing numerous perils in their battle to sustain their budding romance. Besides the violence of everyday prison life, if caught, Nico faces another five years in prison. Staff members target him, fellow inmates envy him, family members abandon him, and his own conscience torments him.

Lisa finds herself in unfamiliar territory. Men and women in society view her as potential prey. How can she be certain that this hardened criminal doesn’t view her in the same light? Following her heart, she is forced to keep her love a secret until she can be certain that she is not being played for a fool.

Eventually, she is forced to discover how far she will go for the love of a man she has never even met face-to-face. When her love and loyalty require that she herself break the law, she is forced to make a tough decision. Under such extraordinary circumstances, can love ultimately triumph over fear of the unknown?

Readers who wish to experience this engaging work can purchase “Chat Unchained: A Wireless Love Story” at bookstores everywhere, or online at the Apple iTunes store, Amazon, Google Play, or Barnes and Noble.