Author Cecilia Johansen’s book “Kimsey Rise: A Family of Farmers” is a riveting tale of one Scottish clan’s journey from their native Highlands to the American colonies

Recent release “Kimsey Rise: A Family of Farmers” from Page Publishing author Cecilia Johansen is an evocative saga following the young MacKenzie brothers on their flight from the English following the bloody Battle of Culloden Moor in 1746, their indentured servitude in Lord Baltimore’s colony, and their liberation and rise through the generations as Americans. They lived the dream of abundant land, preservation and increase of their families, and freedom to profess their religious faith. 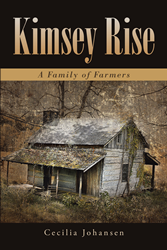 Cecilia Johansen, a California native who lived in the lush upcountry of Waimea, Hawaii with her late second husband, where she cofounded the Hawaii Writers; Guild before ultimately returning to her home state to continue her literary career, has completed her new book “Kimsey Rise: A Family of Farmers”: a stirring novel inspired by the lives of her Scottish ancestors.

In one awful hour, the Scottish Highlanders lost their way of life forever. Despite surviving the Battle at Culloden Moor, Benjamin MacKenzie and his brothers only had cold comfort from Prince Charles Edward Stuart—save yourselves any way you can. Benjamin whisked his family away to Ireland, thinking they would escape the horrible punishment that awaited them should they be caught by their British enemies. They didn’t.

In their native home, the MacKenzies were a proud clan with a proud name. In Ireland, that name would become anathema if they carried it forth, and so it became Kimsey. That name didn’t hide them either from an English prisoner ship and a fate worse than death: sold as indentured servants in Lord Baltimore’s colony. The little family was taken to their knees.

With the good fortune of a fellow Scot as their master who became a good friend and set them on their feet again, the Kimseys found a fertile land and a fresh start. While other challenges would test them, including a war with their old enemies, they started a new clan, the head of which would become well-known, and the many generations would claim descent from Benjamin, their common ancestor.

Readers who wish to experience this engaging work can purchase “Kimsey Rise: A Family of Farmers” at bookstores everywhere, or online at the Apple iTunes Store, Amazon, Google Play, or Barnes and Noble.