Author Charles J. “Chuck” Richardson’s new book “35 Missions to Hell and Back” is a riveting memoir of the Second World War and the 8th Air Force, 390th Bomb Group

Recent release “35 Missions to Hell and Back: A Mighty 8th Air Force, 390th Bomb Group (H) History” from Page Publishing author Charles J. “Chuck” Richardson is the compelling account of a young man called to serve his country in defense of freedom and democracy around the world. The author’s crystalline recollections of military training, deployment, and his service as a radioman and gunner on a B17G bomber based in Framlingham, England, in 1944 offer a vivid portrait of duty, courage, and faith in what has come to be known as the Greatest Generation. 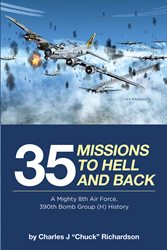 Charles J. “Chuck” Richardson is a 96-year old World War II veteran who served in the European Theater in 1944, pursued a civilian career in the automotive parts industry, and was married to his late wife, Eleta, for nearly seventy years prior to her death in 2012. He has published his latest book “35 Missions to Hell and Back: A Mighty 8th Air Force, 390th Bomb Group (H) History”: an evocative memoir recalling the heroic actions of a group of men united in the war on fascism.

Twenty-plus years in the writing, and for an additional ten years, this gut-wrenching, heartwarming story has been silently biding its time, awaiting a channel for expression. A compelling story of young boys bound by faith, courage, blood, sweat, and tears, and how that bonding created the brave young men they became. Hopefully, all who read this account will feel the deep emotions of terror, disappointment, frustration, laughter, love, peace, and joy experienced by the author during his service as a radioman/gunner on a B17G during World War II.

Some of the stories contained in this manuscript have never been published or made public. Stationed in the European Theater of Operations in Framlingham, England, Mr. Richardson, USAAF, 8th AF, 390th Bomb Group (H), 571st Squadron, was the recipient of numerous major awards and citations, including Distinguished Flying Cross; Air Medal with 4 Oak-Leaf Clusters; 2 Presidential Unit Citations; Russian Medal of Victory in the Great Patriotic War (on behalf of Boris Yeltsin); Certificate in Recognition of Contribution/Service in liberating France and participation in the Invasion of Normandy, signed by French Secretary of Defense John-Pierre Messeret; French Jubilee of Liberty Medal; and French Legion of Honor Medal.
Published by Page Publishing, Charles J. “Chuck” Richardson’s engrossing book is a must-read for history buffs of all ages.
Readers who wish to experience this engaging work can purchase “35 Missions to Hell and Back: A Mighty 8th Air Force, 390th Bomb Group (H) History” at bookstores everywhere, or online at the Apple iTunes store, Amazon, Google Play, or Barnes and Noble.