Recent release “How High the Larks Fly” from Page Publishing author Christine Hamer-Hodges is the captivating true story of Ruth Lindenau, a young girl from a small village in West Prussia, now Poland, who survived three separate prison camps during World War II and how her courage and bravery allowed her to overcome these harrowing, trying times. 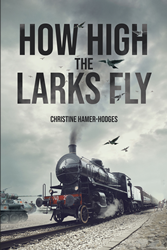 Christine Hamer-Hodges, who was born in England, has lived in the United States for forty-five years and is now a proud American. She has recently completed her new book “How High the Larks Fly”: a gripping and potent true-life story of a young girl who survived three prison camps during World War II.

“It is hard to imagine a childhood more idyllic than the one experienced by Ruth Lindenau, who lived in the Prussian village of Tiegenort in the early 1930s, skating on the river in winter and sledding down snow-laden banks of the river’s dam; taking horse-drawn sleigh rides through the village at Christmas, with all the village children wrapped up in blankets and singing Christmas carols to the sound of tinkling sleigh bells; rowing to her grandmother’s house in the summertime, down a river covered from bank to bank with flowering waterlilies; and eating bread made by her best friend’s father, dripping with rich butter from the local dairy and honey collected from hives at her uncle’s farm. These are the memories that sustained Ruth when, at the age of thirteen, her entire world was turned upside down and she was chosen to become a member of Hitler’s ‘elite class’ and sent away from her family to live in what amounted to be a prison, to begin years of indoctrination into the fanatic workings of the Third Reich,” writes Christine Hamer-Hodges. “Ruth Raible told me about her life when she was seventy-five years old. She had vowed to her husband, Karl, that she would never discuss her past, and she kept that promise until after he died. It was an enormous burden for her, and, I believe, the experiences she kept hidden shaped her entire life. She talked about her childhood as if it was yesterday, and her memories were clear and credible. I know this because I went to Poland and retraced her life, and everything she remembered was true. I tell this story through the eyes of a child, just as Ruth did to me. A story she kept concealed, but which had consumed her for fifty years, seared into her memory and her psyche.”

Published by Page Publishing, Christine Hamer-Hodges’s harrowing tale follows Ruth Lindenau, a young girl from Tiegenort, a lovely little village in what was then West Prussia, now Poland. Ruth was snatched from her family’s loving care at the tender age of thirteen, when she was sent to a camp far from her home. At this camp, Ruth and sixty-five other girls were being indoctrinated into the heinous ways of Hitler’s Third Reich. Starved of food, affection, and all family contact, these young girls were severely punished and brainwashed.

Eventually, Ruth was able to escape her imprisonment. However, this was a time when Germany was about to lose the war, so after only a week of freedom, Ruth had to again escape with her entire village to Denmark on the frozen Baltic Sea. Two more prison camps awaited Ruth and her family, leading to experiences that will astonish and enthrall all readers. Using her talent as a pianist and singer, Ruth survives, and a forbidden romance becomes the pivotal motivation for the rest of her life. Ruth’s tale is a story of profound courage and bravery during the horrors of World War II, and how Ruth’s harrowing experiences shaped her character and personality for the rest of her life.

Readers who wish to experience this gripping work can purchase “How High the Larks Fly” at bookstores everywhere, or online at the Apple iTunes Store, Amazon, Google Play, or Barnes and Noble.