Author Cid Damon’s new book “Oyabun: Chief of the Japanese Mafia (Yakuza)” is a riveting tale inspired by his personal experience as a Filipino musician in Japan

Recent release “Oyabun: Chief of the Japanese Mafia (Yakuza)” from Page Publishing author Cid Damon is a gripping and potent story following the parallel and then dangerously intersecting lives of a band of Filipino musicians making their way around Japan and a criminal yakuza organization. 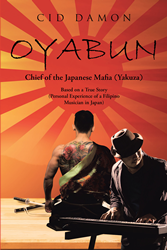 Cid Damon, a well-traveled Filipino musician in his mid-fifties, has published his latest book “Oyabun: Chief of the Japanese Mafia (Yakuza)”: a fascinating and immersive story depicting a little-known facet of the Japanese underworld as seen through the eyes of a Filipino trying to earn a living as a musician in Japan and rescue his partner from the clutches of a vicious crime boss.

Cid, a Filipino musician who defied his loving and protective family by pursuing a career as a musician, dared to go to Japan during the time when the story of Maricris, a Filipina entertainer who was allegedly killed by a yakuza by plunging his sword to her vagina, was all over the news back home.

Cid writes, “He just wanted to work and earn his own money. What better way of doing it than to get paid doing what he enjoyed doing the most — singing.

With another singer, Maria, they went to Japan as a duo and performed in cities from Tokyo to Chiba and Nagoya.

Japan was flowing with money! The place had a way of entertaining you! The delicious foods, the drinks, the drugs (if you’re into it), and of course, the tips!

But without intending it, he got involved with Filipinas who had relationships with yakuza.
His life changed.
He listened to stories told by another yakuza about his boss and his brothers. Every story left him with fear and the urge to get away as far as he could go.
But he had to save Maria, who got herself involved with the boss.
He won’t be able to live with himself if he just left without taking her.
But the task was not an easy one.
How can a musician who hasn’t learned any martial arts and instead spent his days playing his keyboard outsmart an evil man?”

Published by Page Publishing, Cid Damon’s engrossing book is an entertaining tale based on the personal experience of the author while working as a musician in Japan.

Readers who wish to experience this engaging work can purchase “Oyabun: Chief of the Japanese Mafia (Yakuza)” at bookstores everywhere, or online at the Apple iTunes store, Amazon, Google Play, or Barnes and Noble.