“Defectors” from Christian Faith Publishing author Cliff Cochran is a captivating fantasy novel about a war between good and evil, fought in the winter wilderness of modern day Montana. 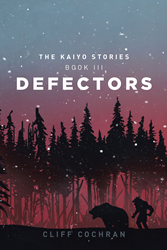 “Defectors”: a gripping and utterly original tale about a grizzly and his human family’s love for one another and their battle to save their friends and their family form the forces of evil. “Defectors” is the creation of published author, Cliff Cochran, creator of the Kaiyo Stories trilogy.

Cochran writes: “Kaiyo is now five years old and a thousand pounds. Tracking down what he thinks to be a bear poacher, Kaiyo is shot and pursued. But Kaiyo escapes and makes his way home to get his brother’s help to go back and take out his attacker. At the same time, Kaiyo’s human father, Sam McLeod, is told by a strange and ominous man that Kaiyo will be destroyed and is warned not to interfere. But Kaiyo and the Mcleods will not be intimidated. They soon learn that they and their friends are on a death list because they stand in the way of a vile, determined archdemon who patrols the American West. So begins a war at the farm and in the Absaroka mountains as both sides gather human soldiers and animal allies to fight and die in the fierce battles that are a part of the ancient war between unseen nations.”

Published by Christian Faith Publishing, Cliff Cochran’s new book is the utterly unique, spellbinding tale of animals that think like humans, from a world mankind long ago forgot, along with their adopted human family as they battle to fend of the forces of evil waging war against them under the leadership of a malevolent archdemon.

Defectors is the third book of the Kaiyo Stories trilogy. The first book, Kaiyo: The Lost Nation set the stage for Kaiyo to find strength and courage and discover love for an amazing and unique human family. The second book, Raphael, is set two years later. Kaiyo is bigger and stronger and is enlisted to rescue a lost hiker who has tread into troublesome territory. Defectors continues the story of Kaiyo and the McLeod family, who are now all that stands in the way of an evil being intent on laying ruin to all they have ever known and loved.

Consumers can purchase “Defectors” at traditional brick & mortar bookstores, or online at Amazon.com, Apple iTunes store, or Barnes and Noble.

For additional information or inquiries about “Defectors”, contact the Christian Faith Publishing media department at 866-554-0919.