Author Clint Bennett’s new book “The Jesuit Warrior” is an epic tale of adventure and dominion, faith and reason for a young Jesuit in the New World.

Recent release “The Jesuit Warrior” from Page Publishing author Clint Bennett is a gripping and potent novel following young Mateo Alvero, an orphaned boy mentored by a Jesuit priest, with whom he embarks on the adventure of a lifetime to the coast of Florida, where he is to convert souls to Christianity while his shipmates capture slaves. His excitement turns to horror as he witnesses the inhumane treatment of the men, women, and children at the hands of the brutal slavers, leading him to question the complicity of the Church and choose a different path. 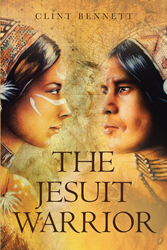 Clint Bennett, a lifelong resident of central Florida who has studied the compelling history of the local indigenous Indians for half a century, has published his latest book “The Jesuit Warrior”: a spellbinding work of historical fiction set in the early years of the eighteenth century.

Clint writes, “Two men of God left Spain for the new world. One of them was a fully ordained member of the elite Jesuit society, and the other was his protégé. The faith of the Jesuit was deeply ingrained and unwavering, while the faith of his student was weak and questionable at best. They each left Spain with different goals. The goal of the Jesuit was to save the souls of the pagan tribes thought to occupy west central Florida, while the goal of the youth was exploration and adventure. The apprentice had witnessed horrific events as a child, events that were approved and encouraged by the church and the inquisition. He would later witness events that would destroy his fragile faith and turn his life in a completely different direction. He became a realist. Although he still searched for truth and honor, he was convinced he would not find it in the teachings and actions of the Jesuits or the Spanish. He renounced his heritage, and the teachings of the Jesuits became irrelevant. He would find his truth and honor in the most unlikely of places, among the so-called pagan savages called the Calusa.”
Published by Page Publishing, Clint Bennett’s engrossing book is an action-packed and richly detailed read for fans of historical fiction.
Readers who wish to experience this engaging work can purchase “The Jesuit Warrior” at bookstores everywhere, or online at the Apple iTunes store, Amazon, Google Play, or Barnes and Noble.