Author Daniel Richmond’s new book “Legends of Growth: Legend of Del” is a thrilling fantasy adventure about a young boy realizing his true potential in a mystical land

Recent release “Legends of Growth: Legend of Del” from Page Publishing author Daniel Richmond is about Del, an eight-year-old boy living on a magical continent. After the continent becomes overrun by a deadly plague, Del and his other hero friends must save the continent from rampaging dragons and other nefarious forces. 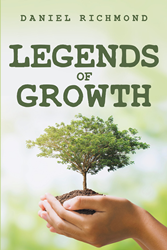 Daniel Richmond, a history buff particularly interested in the rise and fall of empires, has completed his new book “Legends of Growth: Legend of Del”: a gripping and potent fantasy story about a young boy who must save his continent from a plague and the ensuing chaos that engulfs the land.

Published by Page Publishing, Daniel Richmond’s swashbuckling tale takes place in a magical land, on a continent inhabited by a scaled species known as the kin. However, a deadly plague spreads across the continent, leaving behind two species in place of the kin: dragons and half-kin. The half-kin are forced to serve in the king’s guard under strict loyalty. Also roaming the land are spellweavers, an order that investigates nearly everything, from worldly occupations to magic, martial arts, and war.

Del and Chow are two half-kin who emerge into prominence. Del, an eight-year-old boy, is the equal to many spellweaver masters. Chow, who has the plague and is a member of three orders of the spellweavers, is the leader of a rebel group. Del lives in opposition to the spellweavers and fiercely opposes them. Del has been instructed not to leave the mountain he lives on until he turns fifteen years old, but before that can happen, trouble begins.

The plague continues to spread and the king’s new weapon turns. At the same time, the dragons want power and, more importantly, food. Heroes from the continent must survive and persevere, especially as another empire, which the plague mysteriously does not affect, observes this continent with greedy eyes. The leader of this foreign empire wants to conquer the continent to spread his empire. Del and the other heroes must strive to save their continent from these malicious forces and from the hungry dragons, who have an advantage due to the sheer number of dragons. This new empire may be the hope or the threat these heroes fear.

Readers who wish to experience this absorbing work can purchase “Legends of Growth: Legend of Del” at bookstores everywhere, or online at the Apple iTunes Store, Amazon, Google Play, or Barnes and Noble.