Author Darl Rosenquest’s new book “Science or Science Fiction?” is a thought-provoking work exploring the intersection of Christian faith and the natural world

Recent release “Science or Science Fiction? A Geologist Looks at Creation and the Great Flood” from Page Publishing author Darl Rosenquest is a fascinating discussion of myriad Christian themes and their scientific bases, from Genesis and evolution to Noah and his ark as described in the Old Testament. 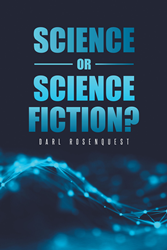 Darl Rosenquest, a geologist and civil engineer who worked for over twenty-seven years with the Pennsylvania Department of Environmental Protection as a soils engineer and later a senior civil engineer and has remained active since his retirement in 2015 by helping local conservation districts catch up on plan reviews, presenting at their public workshops, and in training their staff, has completed his new book “Science or Science Fiction? A Geologist Looks at Creation and the Great Flood”: a compelling examination of generally accepted truths from both the scientific record and Scripture.

The author writes, “‘Follow the science’ is a phrase we often hear these days. All too often it means ‘listen to anything coming from the scientific community that supports my position but ignore anything which does not.’ During my lifetime, I have seen a number of changes in many things that were once ‘known’ to be true. For instance, when I was in grade school, it was a commonly believed ‘fact’ that lemmings committed suicide periodically by jumping off a cliff into the ocean. Likewise, everybody knew that ostriches, when confronted with danger, stuck their heads in the sand to hide. More recently, it was believed that the best way to deal with runoff from storms in urban areas was to get the water offsite as quickly as possible, collect it in large detention basins, and then release it slowly into receiving stream channels. The best way to deal with air pollutants, it was thought, was to send it high into the sky to disperse over a large area. Science has since proved that all of these concepts are not true. In this book, I look at some commonly accepted ideas about the origins of the universe and mankind as well as the account of the great flood of Noah. I have attempted to point out where the line between science and science fiction has been blurred, both by the scientific community and the Christian community. If we can learn to distinguish between fact and fiction, perhaps we can come closer to mutual acceptance.”

Readers who wish to experience this engaging work can purchase “Science or Science Fiction? A Geologist Looks at Creation and the Great Flood” at bookstores everywhere, or online at the Apple iTunes Store, Amazon, Google Play, or Barnes and Noble.