Recent release “Destined to Lead” from Page Publishing author David Abang is a timeless work of fiction and legend celebrating the royal heritage and noble history of a storied African people. 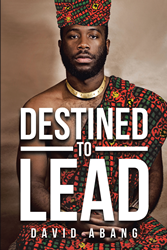 David Abang is a certified welding inspector, project management professional, corporate member of Nigerian Society of Engineers, registered metallurgical engineer, and married father of six currently working as the manager of Environmental Research and Services in the NNPC Research and Development Division in Port Harcourt, Nigeria. He has published his new book “Destined to Lead”: a gripping and potent homage to a beautiful cultural heritage.
“Man and culture are two interwoven realities. The place of legends in cultural sustainability has remained paramount, as societies are able to fashion out the best forms they could take in the future from the much they have learned. This is the shoe that David E. Abang, the author of this work entitled ‘Destined to Lead’, has worn for the African nation of Mbube.

David has taken a great deal of time and effort to narrate in prose form the beautiful cultural heritage of the people of Mbube from the perspective of festivals that bonded them together, especially during Lijie Wuturo (Festival of the King), which was an opportunity not just to celebrate the people’s king in whose life the people’s destiny was tied, but also to celebrate people who exuded legendary qualities during wars, in farming, hunting, and the like.

We see how Lishani, the son of Ashero, a warrior of Ketuen Kingdom, rose to stardom through the influence of his father. His rising popularity aroused the attention of the dreaded king of Ketuen who became afraid that the prediction of Akello the soothsayer would come to pass. Lishani’s affairs with the princess of Ketuen was the last straw that broke the camel’s back; Lishani narrowly survived death in the hands of the king’s executioners and found himself in a strange place. He met several others who had suffered injustice in the hands of the tyrannical king. He raised men of war and staged revenge against the king of Ketuen, which led to his overthrow.

David made his points very clear in simple grammatical constructions that woo the reader to follow the message step by step to the end. He has done this in the most didactic manner, employing a method that is captivating to people of all class. This is a beautiful, insightful, creative, and highly scholarly masterpiece to all those who thirst for the revival of traditional cultural values and mutual coexistence.” -Rev. Fr. Prof. Jake Omang Otonko

Published by Page Publishing, David Abang’s engrossing book is a lyrical homage to a rich and ancient culture.
Readers who wish to experience this engaging work can purchase “Destined to Lead” at bookstores everywhere, or online at the Apple iTunes store, Amazon, Google Play, or Barnes and Noble.