Recent release “The Nixon Environmental Agenda: An Insider's View of Republican Decision Making 1968-1972” from Page Publishing author David Dominick is a comprehensive thesis that goes over the political, social, and historical facets that resulted into a revolution in environmental history. 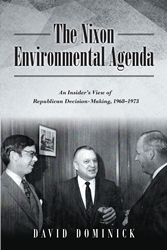 David Dominick, a writer who was involved in multiple workshops and field trips centered on the Yellowstone ecosystem, has completed his new book “The Nixon Environmental Agenda: An Insider's View of Republican Decision Making 1968-1972”: a gripping and potent study that breaks down pressing environmental issues occurring in the late sixties and early seventies.

The Environmental Protection Agency was established as an independent federal agency in December 1970 to coordinate government action on behalf of the environment. The EPA will be celebrating its golden anniversary in 2020.

Mr. Dominick feels the time is right to reflect on the beginnings of the EPA and cast a proactive vision of role of the Environmental Protection Agency in the future. Dominick is a lifelong environmentalist and has unique insight to the birth of the EPA.

Dominick worked as a legislative assistant for two US senators from Wyoming. He assisted Senator Milward L. Simpson from 1965 to 1966 and Senator Clifford Hanson in 1967.

In 1968, he was responsible for personnel placements for the Interior and Agriculture Departments on President-Elect Richard Nixon’s transition team. President Nixon then appointed Dominick as Commissioner of the Federal Water Pollution Control Administration (FWPCA). At that time, the FWPCA was part of the Department of Interior. As Commissioner of the FWPCA, Dominick’s responsibilities included making policy decisions regarding water pollution control, supervising five assistant commissioners, ten regional offices, and numerous national laboratories.

In 1971, President Nixon appointed Dominick as assistant administrator for Hazardous Materials Control for the newly formed Environmental Protection Agency (EPA). He was responsible for national programs in pesticides, radiation, solid waste, noise, and toxic substances. As the principal spokesman for congressional passage of federal pesticides, toxic substances, and noise control legislation, Dominick implemented bans on DDT, predator poisons, mercury, and numerous other agricultural and industrial chemicals. He set radon standards for underground uranium mines and initiated resource recovery and hazardous waste programs. His testimony before congress helped lead to the passage of the 1972 Clean Water Act. In addition, Dominick attended many meetings and conferences around the country, serving as an ambassador of the Nixon Administration’s environmental policies.

Published by Page Publishing David Dominick’s compelling tale is an insider’s view on the Republican decision-making spanning in the years 1968 to 1973. This paper brings a different and closer perspective for readers.

Readers who wish to experience this brilliant work can purchase “The Nixon Environmental Agenda” at bookstores everywhere, or online at the Apple iTunes Store, Amazon, Google Play, or Barnes and Noble.