Author David L. R. Stein’s new book “Wake Up America: The US Experiment Is Failing!” is a thought-provoking exploration of sociopolitical change in America

Recent release “Wake Up America: The US Experiment Is Failing!” from Page Publishing author David L. R. Stein is a sharp critique and analysis of American political realities and current trends in Progressive policy absorption from the Conservative perspective. 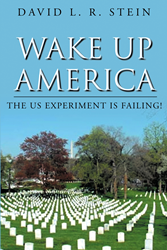 WAKE-UP AMERICA / THE US EXPERIMENT IS FAILING! is the fourth in a series of recent essays by David L. R. Stein in which the author outlines the sociopolitical forces which have been steadily moving the US away from its founding principles and values. Readers who are unfamiliar with the author’s prior essays may be surprised to discover that the forces responsible for the current US sociopolitical upheaval have been building for more than one hundred years and are now getting dangerously close to launching the US into another bloody civil war.

In this latest essay, the author argues that to prevent such a war significant changes must be made to the US Constitution, as well as to US civil, corporate, and criminal laws. He argues that Neo-Marxist societal rot has become so pervasive in the US that it will not be swept away by a single US presidency or by half-hearted efforts; that the original intentions of the nation’s founders have been debased or ignored to such an extent the founders likely would have had great difficulty believing the US government we have today could have evolved from the government they gave us; and further that, if significant reforms are not instituted and soon, the US surely will cease to be a constitutional democratic republic.

Stein argues that the US is now at a turning point: either it will rise to the challenge and institute badly needed educational and governmental reforms, or it will continue its long slide into another bloody civil war or a Neo-Marxist autocracy—which in all probability would be subjugated to a horrific new totalitarian world order orchestrated by a repugnant and resurgent Communist China. He points out that the world has radically changed over the last two-hundred-and-thirty-plus years and US laws and regulations have not kept pace, while at the same time—if due only to the spectacular successes of its largely unbridled free-market capitalism—the US has become the hated focus of insidious, potent, and sinister Neo-Marxist forces around the world desiring nothing so much as destruction of the US constitutional democratic republic as an essential step toward establishment of a Neo-Marxist world government.

Stein concludes that if the Trump reformation ends with the 2020 US presidential election, history will record how the world’s most noble experiment in enlightened self-government ended in abject failure due to the benign neglect of its citizens who were simply too busy, too comfortable, or otherwise distracted to preserve and protect it from the onslaught of Neo-Marxism—in spite of the fact that it’s a murderous totalitarian political ideology built on false assumptions, false promises, the corrosive politics of class envy, and the most outrageous lies.

Readers who wish to experience this engaging work can purchase “Wake Up America: The US Experiment Is Failing!” at bookstores everywhere, or online at the Apple iTunes store, Amazon, Google Play, or Barnes and Noble.