Recent release “Chain of Deceit” from Page Publishing author David McIntosh is a gripping saga with its origins in one captain’s fervent desire to bring the horror of the Second World War to an end, and the establishment of a powerful black-market ring selling stolen military supplies to the highest bidder. The discovery of 1940s-era military equipment that had reportedly been lost in the Atlantic in a New Orleans warehouse sparks an investigation that ultimately leads to shocking revelations about many high-level American leaders and a conspiracy spanning half a century. 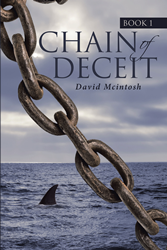 David McIntosh, a father, grandfather, and retired master sergeant with over twenty-five years of service with Army Military Intelligence specializing in ground and airborne electronic warfare equipment and operation currently traveling around the country in his motor home with his wife and German Shepherd, has completed his new book “Chain of Deceit”: a spellbinding tale of patriotism, greed, and the long arm of justice.

“Chain of Deceit Book 1” is a story that starts in the later years of World War II with mission to end World War II. The plan was to drop the first atomic bomb on Berlin. Moving the first untested atomic bomb across the Atlantic Ocean during a war was not going to be easy and had to remain completely secret; not even the crew or Marines guarding the bomb knew what was in the crates. Little did they know that two crates were the bomb and two more were loaded with gold bullion. The captain of the Liberty ship hated the war and had his own idea as to how to end it. But the best-laid plans go to hell when the shooting starts, as they say. The war made it easy for a group of ruthless men to create a black-market ring and sell stolen military hardware and supplies.

Davin Pierce, ex–Army first sergeant and now Marine insurance investigator, is assigned to investigate why military hardware is in a warehouse in New Orleans and not at the bottom of the Atlantic Ocean as reported. This is the start of a series that touches on many aspects of our lives, military, politics, love, hate, greed, deceit, and much more.
Published by Page Publishing, David McIntosh’s engrossing book is a fast-paced and suspenseful novel that keeps the pages turning until the satisfying conclusion.
Readers who wish to experience this engaging work can purchase “Chain of Deceit” at bookstores everywhere, or online at the Apple iTunes store, Amazon, Google Play, or Barnes and Noble.