Author David Munro’s new book “Case Closed: The Rare Murder” is a gripping novella that opens with the discovery of a murder victim and follows the ensuing investigation

Recent release “Case Closed: The Rare Murder” from Page Publishing author David Munro is a modern crime exploring the hunt for a killer and the search for motives in the murder of a good man. Detectives Case and Miles desperately need a break in the case for any hope of bringing the murderer to justice. 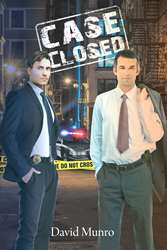 David Munro, a lifelong resident of Kansas City, Missouri with a plethora of interests and a degree in geography and multicultural studies from Pittsburgh State University, Kansas, has completed his new book “Case Closed: The Rare Murder”

Port City is a fictitious city of more than one million people and a police department of ten thousand sworn officers and support staff. Life is anything but boring for police officers on the front lines with the Port City Police Department. Sometimes they find themselves in dangerous situations. Sometimes they are trying to solve crimes without any leads. Sometimes they walk in on situations where someone is in danger. For Detectives Tony Case and Vinny Miles, things are not that different. Despite being veteran detectives, they find themselves in situations where they need an extra hand. This became all too obvious when they were assigned a case about a man who was murdered. The two detectives faced many challenges.

There was not very much to start off with. In addition to that, they were up against a criminal who was willing to kill and wanted to catch the perpetrator before the individual could victimize someone else. They found themselves in situations where they had to make split-second decisions. Furthermore, they ended up in life-and-death situations on multiple occasions, such as a shoot-out and a high-speed car chase. They found several suspects, but would any of the suspects turn out to be the person responsible? If so, which suspect was the killer? Could there be more than one person involved? Could they apprehend this person before the individual struck again? Would a tip from a Good Samaritan be enough to catch the person responsible? How many times would Detective Case and Detective Miles end up back at square one? Would a relative of Detective Case inadvertently help solve the crime? “Case Closed: The Rare Murder” is full of suspense, action, teamwork, and occasionally, a smart-aleck remark by Detective Miles.

Published by New York City-based Page Publishing, David Monro’s engrossing book is a fast-paced novella depicting a team of dedicated detectives and the search for a killer.

Readers who wish to experience this engaging work can purchase “Case Closed: The Rare Murder” at bookstores everywhere, or online at the Apple iTunes store, Amazon, Google Play, or Barnes and Noble.