Author David Schimpf’s new book “From Boys to Men: A Year in Vietnam for the Ordinary Soldier” is a candid and evocative memoir of his service in the US military

Recent release “From Boys to Men: A Year in Vietnam for the Ordinary Soldier” from Page Publishing author David Schimpf is an illuminating reflection of life for the countless military personnel in serving in the less-dramatic yet indispensable supporting roles during the Vietnam conflict. 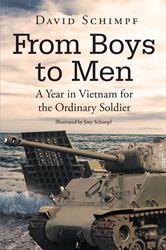 David Schimpf, a Vietnam veteran, retired General Motors employee, father, and grandfather currently residing in his native Saginaw, Michigan with Linda, his wife of fifty-two years, has completed his new book “From Boys to Men: A Year in Vietnam for the Ordinary Soldier”: an eye-opening and entertaining account of his military service from 1965 to 1967.

The author shares, “This book is a true story of what an ordinary soldier not only went through in the Army but also had to endure in Vietnam. Most military personnel in Vietnam were not in combat but served as support troops. This was what I did, but it wasn’t boring, far from it. You will find that out. I served on an LCM (Landing Craft Marine), which was a large landing craft boat similar to what was used in WWII at Normandy. Yes, the Army operated boats also. Although our job was to keep the Military supplied, there were also missions up the coast to deliver tanks and ammunition. These were scary, to say the least. Included are humorous, strange, and uncommon occurrences that happened during that year in Vietnam. Some are combat related.”

Readers who wish to experience this engaging work can purchase “From Boys to Men: A Year in Vietnam for the Ordinary Soldier” at bookstores everywhere, or online at the Apple iTunes Store, Amazon, Google Play, or Barnes and Noble.