Recent release “Murder Hits the Campaign Trail” from Page Publishing author David Schwinger is a brilliant novel about a female detective’s pursuit for justice and answers in a murder crime that will take her around the town and encounter the darkness behind it and its people. 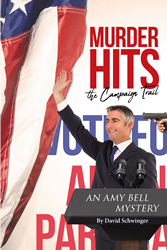 David Schwinger, a retired teacher; has completed his new book “Murder Hits the Campaign Trail”: a mind-boggling thriller where we follow a case that challenges Detective Amy Bell’s wit and ability to solve a mystery that seemingly leads her nowhere.

Schwinger writes, “In October of 2016, Allen Parkman was a charismatic Republican candidate for committeeman in Corville Township, New Jersey. Right in the middle of the campaign season, he was lured to the porch of a house in a run-down section of town, where he was shot and killed. A note was left under the dead body condemning both Allen and Trump. The police were getting nowhere, so the mayor of the township convinced supersleuth Amy Bell to take the case.

Amy realized that there were many different motives for various people to kill Allen. His ex-wife and two children were refusing all contact with Allen after she divorced him due to multiple episodes of cheating. A local Democrat politician might have wanted to get rid of the Republicans’ most electable candidate, who might also carry other Republican candidates to victory. A local Republican might have believed that killing Allen and leaving the note would create a big sympathy vote for Republican candidates.

Then there were the married women whom Allen had propositioned, as well as their husbands. There were also hundreds of investors who had lost money due to the stock-touting scams perpetrated by Allen’s company. And Allen had two partners in his company who might have had issues with him.

Amy was not confident that any of these people would have killed Allen based on those motives. She was also uncomfortable about the note left under the body but couldn’t pinpoint exactly why. Would the beautiful and vivacious detective be able to find the key to solving a case that seemed unsolvable? And if she did succeed, could she produce the evidence to bring the killer or killers to justice?”

Author David Schwinger, when not writing Amy Bell mysteries—there are now twelve—enjoys composing songs, playing pickleball, and traveling the world with his wife, Sherryl. He first met Sherryl when she was his student in a mathematics class he taught at City College of New York. Their secret romance became the inspiration for his first Amy Bell mystery, The Teacher’s Pet Murders.

Published by Page Publishing, David Schwinger’s bewildering criminal tale will definitely give the readers another much-awaited adventure in his series of books.

Readers who wish to experience this thrilling work can purchase “Murder Hits the Campaign Trail” at bookstores everywhere or online at the Apple iTunes store, Amazon, Google Play, or Barnes and Noble.