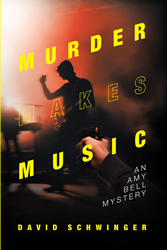 David Schwinger is an avid composer, pickleball player, world traveler, and retired teacher of mathematics at City College. He is currently living in Florida with his wife, Sherryl and has completed his new book “Murder Makes Music: An Amy Bell Mystery”: a riveting page-turner and the eleventh volume in the Amy Bell series.

David writes, “Tony Capadora was in big trouble. He had been charged with the shooting murder of pop singer/songwriter Filip Beron, and the evidence against Tony appeared to be overwhelming.

"To start, Tony had publicly accused Filip of taking credit for writing a hit song that Tony had actually composed. Then, the murder weapon had been found buried in Tony’s backyard. Finally, Filip had been able to write, in his loose-leaf, the first four letters of Tony’s last name, just before he died.

"Tony was innocent, but he had no alibi and very little hope of avoiding decades in prison. Then, superstar detective Amy Bell was hired to try to clear Tony and find the real killer. With the encouragement and assistance of her husband, Jeremy, Amy slowly but surely uncovered various aspects of Filip’s dark side. She identified many people who had reason to wish that Filip were dead.

"But it would take more than just finding other possible suspects to save Tony from the nearly airtight case against him. A police detective told Amy she was pursuing a ten-million-to-one long shot. But the vivacious and witty Amy was not one to give up, regardless of the odds.”

Published by Page Publishing, David Schwinger’s engrossing book is a must-read for fans of detective fiction.

Readers who wish to experience this engaging work can purchase “Murder Makes Music: An Amy Bell Mystery” at bookstores everywhere, or online at the Apple iTunes store, Amazon, Google Play, or Barnes and Noble.

About Page Publishing:
Page Publishing is a traditional, full-service publishing house that handles all the intricacies involved in publishing its authors’ books, including distribution in the world’s largest retail outlets and royalty generation. Page Publishing knows that authors need to be free to create - not overwhelmed with logistics like eBook conversion, establishing wholesale accounts, insurance, shipping, taxes, and the like. Its roster of accomplished authors and publishing professionals allows writers to leave behind these complex and time-consuming issues to focus on their passion: writing and creating. Learn more at http://www.pagepublishing.com.