Recent release “The Truth Bird Six” from Page Publishing author David Velde is a wild and action-packed adventure across the galaxy depicting a race of warrior women offering refuge to human refugees who fled Earth in a desperate bid to escape a new and highly toxic authoritarian American regime. 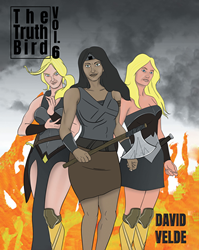 David Velde is a Manhattan-born father, grandfather, construction entrepreneur, and real estate investor who has been an Illinois resident since the age of ten. He has published his new book “The Truth Bird Six”: an irreverent and steamy political romp through the universe.

David writes, “During a recent space exploration mission through one of the newly constructed wormholes, Sam, Justin, Jenny and I, accompanied by the Star God Giorgio, Bobo, Jake, Flea, and a team of Grey aliens, discovered a planet with atmospheric conditions similar to Earth, that was primarily populated with a female human race. They were experiencing civil unrest because of the brutal treatment inflicted among them by their dictator ruler, Joan. The disingenuous queen welcomed us aboard for a tour of their planet but then took Jenny, whom she was obsessed with, as her personal guest with no intentions of ever reuniting her with us. Giorgio and the Greys were on to the sinister queen’s motives. They implemented a brazen rescue and accomplished getting us all safely off Amazonia.

Three months later, Demerra, an Amazonian warrior, came to Earth to inform me that DNA samples were taken from us during the visit with the intention of cloning Jenny but instead was used to produce our son, who, once born, was taken by a group of resistance forces into hiding to protect. Giorgio, the aliens and us, returned there to rescue him and deal with the villainess queen once and for all. During the rescue, the resistant force carried out a coup, overthrowing the queen and putting her in the castle dungeon, where she would await her trial. Instead of returning back to Earth, Sam and Justin decided to stay on Amazonia to help Demerra and the interim government restore order and begin implementing a new democratic government. Sam teamed up with Demerra’s sister and top aid, Jane, who is also a legendary warrior and diplomat, to write the new constitution and structure the new institutions that would be needed on Amazonia. They lead Amazonia into a new chapter of history, uniting the people under a fair and democratic system, and over a fifteen-year period, with the help from the gray aliens, they bring Amazonia out of the dark ages and turn it into a high-tech modern planet with compatible transport stations on Earth.

They enter into diplomatic relations with world leaders from Earth, opening the doors for trade and immigration. Demerra helped divert a massive humanitarian crisis from turning into the largest famine of all time, by taking all the refugees that wanted to leave earth and offering them a new home on Amazonia. Because of political divisions everywhere on Earth fueled by the Trump Administration and Vladimir Putin, they were left to rot, and die, as false narratives branded their character by those who support populism. The refugees, grateful to have a place to start over, wanted nothing more than to reclaim their dignity by example proving the horrendous things that had been said about them and their children weren’t true. They thrived and worked hard to build their community and produced some of the greatest geniuses with new innovative ideas that contributed to vast development and modernization of Amazonia.”

Readers who wish to experience this engaging work can purchase “The Truth Bird Six” at bookstores everywhere, or online at the Apple iTunes store, Amazon, Google Play, or Barnes and Noble.