Recent release “Truth Bird Five” from Page Publishing author David Velde is a wide-ranging work of fantasy fiction that takes readers on an interplanetary adventure from Earth, where America is grappling with social and political upheaval, to Amazonia, a parallel planet inhabited by women under the dominion of an autocratic queen. 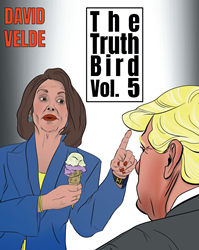 David Velde, a longtime resident of Illinois, real estate and construction entrepreneur, father, and grandfather who is dedicated to volunteerism and philanthropy on behalf of the homeless community and St. Jude’s Children’s Cancer Research Hospital, has published his latest book “Truth Bird Five”: a provocative and action-packed fantasy with unforgettable characters plucked from today’s headlines.

David writes, “There was trouble brewing on Amazonia. Amazonia, a planet inhabited by women that live under the rule of their dictator queen, Joan, had DNA samples taken from David and Jenny when they visited earlier that year in an attempt to clone Jenny. Their scientist, appalled with the queen’s request, produced their natural son instead and took him into hiding when he was born. Joan, outraged by the betrayal, unsuccessfully turned Amazonia upside down, looking for the insubordinates.

Meanwhile, Amazonia’s great warrior, Demerra—who was part of a resistance force planning to overthrow the queen—traveled all the way to earth, looking for Justin to inform him of the latest developments and to notify David and Jenny of their newborn son. Once David found out, he contacted Giorgio, who became furious after hearing the news. Sam, David, and Justin, along with Giorgio and all the aliens, head back to Amazonia to bring the boy home and to settle the score with the renegade queen once and for all. When they arrive on Amazonia, the Queen’s forces were on an all-out offensive against the resistant forces and were closing in on the boy’s whereabouts.

The Truth Bird makes a daring trip to CNN studios to face off with his arch nemesis, Rudy Giuliani, on primetime live with Chris Cuomo over the mounting evidence of corruption and criminal behavior surrounding the Trump administration.”
Published by Page Publishing, David Velde’s engrossing book is an entertaining blend of science fiction and political commentary.
Readers who wish to experience this engaging work can purchase “Truth Bird Five” at bookstores everywhere, or online at the Apple iTunes store, Amazon, Google Play, or Barnes and Noble.