Author Dedrick Jenkins’s new book “Block Bleeder” is a potent tale of street life, addiction, and the hustlers existing for nothing beyond their next score

Recent release “Block Bleeder” from Page Publishing author Dedrick Jenkins is a gritty novel centered on the life of a crack addict who engages in petty crime before getting clean and becoming a kingpin himself. 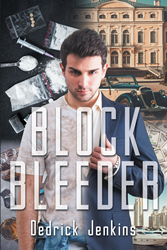 Dedrick Jenkins is a Louisiana native who moved to Texas at the age of nine and personally saw the effects of urban life as well as a ten-year prison term. He has published his new book “Block Bleeder”: an evocative work of realistic fiction inspired by his own experiences on the Dallas streets.

The author writes, “My approximately 65,000-word novel is about a full-blown crack addict named Crumb, who is willing to take penitentiary chances for his drug of choice. Crumb was going around Dallas committing crimes to support his habit until the police caught him with some crack. He was sentenced to a prison rehab, but after he was released, he was struggling. Crumb, who was desperate for a better life, committed an armed robbery and made away with $50,000, which he invested in some powder cocaine. He became the drug kingpin of Dallas who got involved with Fat Cat, who is the lady his heart yearned for during his addiction.

Before Crumb and Fat Cat got together, she was surviving from paycheck to paycheck taking care of her young daughter, Shantel. Crumb and Fat Cat’s brother, Lil Albert, were there for each other throughout the novel and one day Lil Albert rode with Crumb to watch his back while he made a big dope deal. Lil Albert betrayed Crumb and attempted to kill him so he could take the money and dope, but the plan didn’t work out the way he intended it to.
This novel is also about a group of men who commits a home invasion and robs a big-time dealer of his money and dope. The group of guys started doing their own individual thing in the dope game, but bad luck is on their side.”

Published by Page Publishing, Dedrick Jenkins’s engrossing book is a stirring cautionary tale warning against succumbing to the easy allure of a fast life of crime on the streets.

Readers who wish to experience this engaging work can purchase “Block Bleeder” at bookstores everywhere, or online at the Apple iTunes store, Amazon, Google Play, or Barnes and Noble.