Recent release “Ghost Lips from the Trickster: A Civil War Story” from Page Publishing author Dennis Boisvert is the supernatural story of a soldier during the Civil War who uncovers a vast supernatural underworld and is thrust into an expansive conspiracy for the occult forces to gain more power. 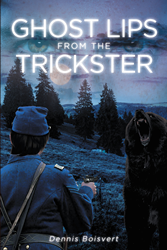 Dennis Boisvert, a social worker in Massachusetts with a lifelong interest in writing, has completed his new book “Ghost Lips from the Trickster: A Civil War Story”: a gripping and potent story about otherworldly forces undermining the Civil War.

Published by Page Publishing, Dennis Boisvert’s gripping tale follows Sergeant Victor Peters as he breaks away from a Rebel train, running hard from soldiers with vicious dogs closing in fast behind him. Hopelessly lost deep in the woods about to be caught, Victor suddenly sees a ghostly vision of a drummer boy who was shot that morning, pointing Victor in the direction of a steep hill. Climbing up the hill, Victor shakes off the vicious dogs and runs until dusk to an abandoned copper mine. There, he finds a group of women dancing around a huge campfire while protected by a hideous beast.

An ex-slave, Basil, tells Victor he has entered a bizarre world controlled by a runaway-slave woman, Tamar, who is a wizard of all witches. Tamar uses sacred texts to communicate with the dead, and with so many soldiers killed on the battlefield, mothers and wives come seek her services because of her portal to the underworld. Tamar has to ability to summon for dead soldiers’ families the ghost of their lost loved ones to read their lips. Victor becomes trapped by Tamar, who had sent the drummer boy ghost for him to find his way to her. She had grand plans to expand her occult tribe by entrapping Victor to be used as a stud master.

However, Victor must escape so he can return home to care for his ill child, Bessie, but he is up against the ever-growing mystical power of Tamar. Basil tells Victor that his only hope for escape is a beautiful ex-slave girl, Autumn, who knows Tamar’s secret; the only way to escape is to kill the fearsome beast Tamar controls. Victor senses the inherent danger in his incredibly challenging mission, but time is running out and he must escape Tamar’s clutches and return to his family.

Readers who wish to experience this mesmerizing work can purchase “Ghost Lips from the Trickster: A Civil War Story” at bookstores everywhere, or online at the Apple iTunes Store, Amazon, Google Play, or Barnes and Noble.