It has been 26 years since the Rev. Christine Coleman experienced the bloody and horrific 1994 genocide that plagued the African nation of Rwanda. The country’s spring opened a terrifying killing season that grew into an apocalyptic nightmare that few have escaped. 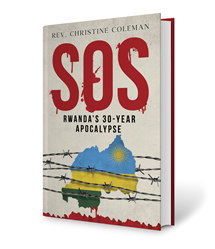 It has been 26 years since the Rev. Christine Coleman experienced the bloody and horrific 1994 genocide that plagued the African nation of Rwanda. The country’s spring opened a terrifying killing season that grew into an apocalyptic nightmare that few have escaped. Since then, the blood of millions of innocent men, women and children has soaked into Rwanda’s soil as Paul Kagame’s death squads follow their leaders’ orders.

Coleman, a Christian human rights activist and motivational speaker, turned her personal story and harrowing experiences into a powerful new book called SOS: Rwanda’s 30-Year Apocalypse which is available on her website: https://christinecoleman.org/.

During the Rwandan genocide, members of the Hutu majority murdered as many as 800,000 people—mainly people who belonged to the Tutsi minority.

Coleman takes readers through Rwanda’s history sharing details that few outside the country would know. She describes a country that has paid dearly for its trusting nature, that endures the terror of religious persecution, and whose people are afraid of publicly speaking out about the government’s abuses because, even in their own homes, they are spied on.

“Rwanda is the only country I know of where citizens are not allowed to think and choose for themselves,” she noted. “Citizens are told what to wear, parents are told how many children they can have, farmers are told what to plant and when to harvest and who to sell to, and public servants are told who to follow on twitter. Anyone who does not follow orders is perceived as an enemy of the country.”

Coleman further describes Rwandan society as a world of intimidation, harassment, lies, deception and, often, death. No one is immune and living abroad does not guarantee Rwandans’ safety. They wait for the rest of the world to see what is happening, what their government has so swiftly, quietly, and efficiently covered up for so long.

The book contains stories from Coleman’s friends, acquaintances, and national icons. Many of them have been silenced forever by a power-hungry regime that turned a peaceful nation that she describes as “naïve,” to one that weeps and has had their basic human rights stripped from them. Coleman made sure that their stories did not die in vain.

“I am here to sound the alarm! I’m here to tell you the truth of what has happened, and is happening still, in Rwanda,” Coleman says. “Rwanda needs your help.”

To find out more about Coleman, visit her website, ChristineColeman.org.

About The Rev. Christine Coleman
The Rev. Christine Coleman is a writer, motivational speaker, televangelist, and the founding pastor of Blazing Holy Fire Church. A native of Rwanda, Christine migrated to the United States in 1997, following the genocide and wars that ravaged the Great Lakes Region. She is an activist and has been anointed by the Lord to pray and minister to heads of state and world influencers. In May 2017, she was one of the nation’s faith leaders who joined President Trump at the White House as he signed an executive order to protect religious liberty. Christine is married to Michael Coleman. They have one son, Christian, and make their home in the Rocky Mountains. For more information, visit http://www.ChristineColeman.org. ###