Author Desmond Dalrymple’s new book “Dancing with Wolves” is a poignant tale of poverty, homelessness, and one man’s determination to overcome his financial challenges

Recent release “Dancing with Wolves” from Page Publishing author Desmond Dalrymple is an evocative story illuminating the plight of the working poor in the labyrinthine system of homeless support facilities in New York City, and the significant barriers to breaking out of the cycle of poverty to all but the most fiercely determined. 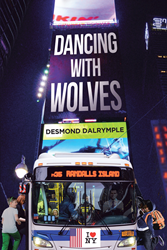 Desmond Dalrymple is a father, grandfather, and former police officer in his native Trinidad and Tobago who has lived in the Bronx since he immigrated in 1991 and graduated from John Jay College of Criminal Justice with a bachelor’s degree in security management. He has published his new book “Dancing with Wolves”: a vivid portrait of the fear, uncertainty, and hopelessness experienced by the working poor in America.

The author writes, “Dancing with Wolves” is a homeless tale of one man’s struggle to find affordable housing in New York City at a time where the Bloomberg Administration would have not given any priority to the plight of the now seventy thousand men, women, and children that experienced homelessness in New York City on a nightly basis. After being victimized and treated like the black sheep in his family and by friends, he becomes homeless after being evicted by the sheriff’s department and finds himself at a facility overseen by the Department of Homeless Services and is sent to Wards Island, also known as Randall’s Island, in Manhattan across from the East River in East Harlem. A low-level prison facility rampant with drug use, fights, and a staff that operates as if they are trying to make a budget in trying to transition homeless men out of the system. Generally, there are fifteen men to a dorm, and there would be multiple personalities at play. It would be a test of mental fortitude to survive in such an environment. I am essentially a lamb and would have to survive being chased by wolves daily and would have to run with the bulls if necessary. I would have to go through a mental reformation and adapt to my environment and would end up being like Daniel in the lion’s den, knowing that my destiny is in God’s hands.”

Published by Page Publishing, Desmond Dalrymple’s engrossing book is an inspiring story of courage and perseverance for a working man who unexpectedly finds himself homeless in New York City.

Readers who wish to experience this engaging work can purchase “Dancing with Wolves” at bookstores everywhere, or online at the Apple iTunes store, Amazon, Google Play, or Barnes and Noble.