“Blessed in Battle: Unforgettable Memories of God's Miracles in Combat” from Christian Faith Publishing author Dick Lyle is an utterly captivating tale of survival against all the odds. It incorporates as its central themes the power of faith and prayer, the occurrence of miracles, and the presence of God throughout the times of greatest need. 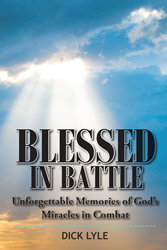 “Blessed in Battle”: a gripping and awe-inspiring account of how God protected an entire platoon from destruction during the Vietnam War. “Blessed in Battle” is the creation of published author, Dick Lyle, a retired US Army major awarded both the Bronze Star for Valor and the Silver Star.

Lyle writes: “God does answer prayers, and this book exemplifies how prayer and belief in God during combat work. He brought about miraculous results for six months that prevented the loss of life and kept severely wounded soldiers alive until they could be evacuated off the bloodstained battlefields. God’s grace and love protected my platoon from those evils of war, with only one soldier under my command killed in action and taken into heaven’s army.”

Published by Christian Faith Publishing, Dick Lyle’s new book presents an utterly compelling case for the occurrence of miracles and the power of prayer.

This poignant, faith-affirming book tells the tale of how one platoon, in a war that saw the death of nearly 60,000 Americans, was diverted from harm and shepherded to safety with the help of God’s timely and unmistakable intervention in their time of dire need.

View a synopsis of “Blessed in Battle” on YouTube.

Consumers can purchase “Blessed in Battle” at traditional brick & mortar bookstores, or online at Amazon.com, Apple iTunes store, or Barnes and Noble.

For additional information or inquiries about “Blessed in Battle”, contact the Christian Faith Publishing media department at 866-554-0919.