Recent release “The Kid and the Keepers” from Page Publishing author Donald Glover follows the extraordinary adventures of Jeru, a kid who finds himself in fascinating dream visions that gave him gifts and showed him how to appreciate cultural heritage. 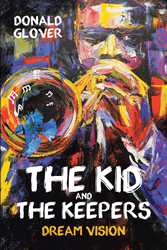 Donald Glover, an English instructor promoting cultural awareness through the arts, literature, and history; has completed his new book “The Kid and the Keepers: Dream Vision”: a gripping and potent read about Jeru and his sudden magical exploration into strange places where he has to go up against the unfamiliar.

Glover writes, “The Kid and the Keepers: Dream Visions chronicles the fantastic adventures of its young, trumpet-playing protagonist, Jeru ‘the Kid’ Johnstone. The action opens with Jeru petitioning his father for permission to quit his instrument during their weekly trip from his private lessons in Harlem. He struggles sorely to express his dissatisfaction and finds a welcomed diversion in a strange bird that distracts him so completely that he abandons his appeal. Later, the bird visits Jeru’s house, enters his open bedroom window, summons him with a wink, and hops into his trumpet’s bell. Seconds later, Jeru ‘falls through’ his trumpet and comes to a stop at the New York’s A train of the 1940s. This train that inspired a jazz standard (‘Take the A Train’) takes the two adventurers to Harlem where Jeru follows the bird and a small group of musicians to Minton’s Playhouse, the place where bebop jazz was created. While there, he befriends Dizzy Gillespie and gains insight and perspective about jazz musicians and their music. In addition, during various dream visions, he learns important things about himself. The most important lessons occur during his dream of a trip to a jazz Camelot, where he confronts and defeats the practice monster, the entity that chokes and feeds on the passion and ambition of jazz musicians until they become uninspired and abandon their art.

Later he meets Buddy Bolden (the creator of jazz) and Louis Armstrong, among other prominent jazz musicians. Before his journey home, he recognizes and embraces his role as a keeper of not only jazz music but also of family history, roots music, faith, and other aspects of cultural heritage. His adventures, both those in present day Harlem and in Harlem of the 1940s, enable him to confront various fears and to become a more confident, learned, and ambitious character.”

Published by Page Publishing, Donald Glover’s riveting tale will take the readers on a journey with Jeru as he discovers a world and a mission beyond his dreams.

Readers who wish to experience this amazing work can purchase “The Kid and the Keepers: Dream Vision” at bookstores everywhere, or online at the Apple iTunes Store, Amazon, Google Play, or Barnes and Noble.