Author Doris Christian-Johnson’s new book “The Playmates of Harvest View” is a riveting tale of betrayal, murder, and justice with roots in a close-knit Missouri town

Recent release “The Playmates of Harvest View” from Page Publishing author Doris Christian-Johnson is a gripping and potent work of dramatic fiction centered on the global pursuit of a privileged yet cold-blooded band of drug traffickers and killers whose descent into crime began with the brutal rape and murder of a young girl in a historically peaceful Midwestern community. Becky’s best friends from childhood resolve to someday avenge her death and bring her assailants to justice. 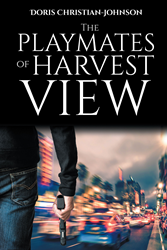 Doris Christian-Johnson, a Mississippi native and psychiatric social worker currently residing in Detroit, Michigan, has published her new book “The Playmates of Harvest View”: an epic cat-and-mouse thriller that keeps the pages turning until the stunning conclusion.

“The Playmates of Harvest View” is an absorbing story of deception, romance, forbidden desires, murder, and greed. In a small, secluded close-knit community in the state of Missouri, three sisters—Rebecca, Neaverna, and Samantha Palermo—like most, enjoyed the security and tranquility, until that late afternoon in June. Their peaceful lives were splintered when Rebecca went missing, and later found raped and murdered. Her friends and male playmates, Thaddeus Kennedy, Jeremy Browriskyzcoff-Mancina, Joel Earl Baptista, and Joseph Mancina, vowed to avenge her death in later years, at any cost.

The suspects, Peter Cruzada and his friends, Timothy Monacelli, Sampson Durgard, and Travis Harvey, were the teenage sons of super rich and powerful parents, who lived lives of luxury in the suburbs. They were the elites of society and deemed the pillars of their community. At an early age, the little band of boys’ child play turned into something far greater than anything one could’ve ever imagined. Their cruel behaviors landed them in juvenile detention facilities. This was just the beginning of a life that placed the group of boys on the wrong side of the law.

In later years, a rash of murders and heavy drug trafficking throughout the United States, Canada, South and Central America, and the Caribbean islands came to the attention of the United States government. Their investigation of these crime sprees led them to the tight closed doors of Peter, and his gang. The gang had grown into a well-organized drug cartel. The world was their playground, and they had become the untouchables.

The Central Intelligence Agency Special Task Force was formed, and Thaddeus was the CIA agent who was appointed to oversee the operation. His job was to apprehend Peter and his gang, by any means necessary. He recruited his friends, who were also his childhood playmates, to assist him in apprehending the gang. They never thought that their innocent child play of crooks and robbers would manifest into real-life drama.

The relentless manhunt led them to the other side of the world, and back again. Things intensified when they learned that their former classmate, Karen Shaw, was part of the gang. She was dubbed the Gutsy Missouri Bad Girl. Fearless and bold beyond the meaning of the word, she craved bloodshed, which was evidenced in the string of murder victims that she left in every path that she chose to travel.

Already faced with unimaginable danger, even death, the Central Intelligence Agency Special Task Force discovered that Peter and his gang had joined forces with a few dirty CIA agents. Driven by greed and the desire to control the underground world, the gang clashed with the mighty playmates of Harvest View. In a bloody showdown in Las Vegas, Nevada, their reign of terror came to an end.

Through the years, dating all the way back to their childhood, the playmates of Harvest View’s relationships with the sisters of the murdered girl progressed to matrimony, and a lifestyle of class and distinction. Easily said, but not so easily done.

This superbly crafted novel has near-perfect balance of action and will attract readers from multiple genres. It’s filled with vivid characters whom you would fall in love with, and some you would love to hate. The dramatic actions of these characters pull the readers into incredible sequences of jaw-dropping, spellbinding, and page-turning suspense.

Readers who wish to experience this engaging work can purchase “The Playmates of Harvest View” at bookstores everywhere, or online at the Apple iTunes store, Amazon, Google Play, or Barnes and Noble.