Author Douglas Schanzenbach’s new book “Vietnam: My Long Journey Home” is a poetic tribute to the horror, confusion, and valor of military service in the Vietnam era

Recent release “Vietnam: My Long Journey Home” from Page Publishing author Douglas Schanzenbach, Captain USMC is a collection of evocative poems expressing the unimaginable experience of a young soldier serving his country in an unwinnable war. This slim volume of verse offers a cathartic first step toward healing the wounds of battle both seen and unseen. 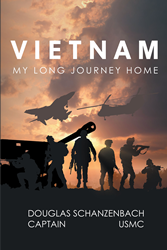 Douglas Schanzenbach, Captain USMC, a married father, grandfather, and Vietnam veteran who retired after nine years of service in the US Marine Corps, has published his latest book “Vietnam: My Long Journey Home”: a poignant collection of poetry recalling the fear, disillusionment, and tragedy of a nation in the wake of the Vietnam conflict.

The author writes, “The book is an exploration of the Vietnam conflict from my personal experience. Given the time and distance from the event, the perspective becomes clearer. Two administrations, Lyndon Johnson’s and Richard Nixon’s, lied, distorted, and extended the war for years, resulting in thousands more dead and wounded. Cabinet members such as McNamara and Kissinger were directly culpable in misleading the American public regarding the success of operations in that country. Perhaps most tragic were the nonstop visits by government officials and members of Congress to Vietnam. They were feted, debauched, and lied to. Their subsequent press conferences always painted a rosy picture of progress and winning. As early as 1965, the CIA was reporting the conflict as being unwinnable.

There were several unique properties of this conflict. While only one in five GIs were assigned combat duty, there were no “safe” or “rear” areas. Nobody had the luxury of relaxing, feeling safe. GIs were rotated in and out of country on an individual basis. When our tour was over, we were put on an airplane, and hours later, we were back in the land of the BIG PX with little or no decompression time. The logistics of removal of the dead was so efficient there was almost never a chance to say goodbye, to pay respects, to process the loss. Perhaps the two most unique elements of the conflict were the fact that we never lost a battle but lost the war and the surreal intrusion of live war coverage every night into the television sets of America. This latter fact gave birth to pressures on MACV to invent such news bits as body count, hooches burned, acres of defoliation, and gallons of Agent Orange. Throughout this circus, the American fighting man distinguished himself as a warrior, as a patriot, and as resilient in the face of a determined and skilled enemy. Once back in the USA, there was trauma and vitriol experienced by many at airports and street demonstrations. Agent Orange and PTSD have combined to result in more Vietnam vets dying by suicide than died during the conflict. The nation’s homeless population is, even today, comprised approximately 20 percent Nam vets.

The healing began with the Vietnam Memorial (the Wall) and has picked up some momentum with the Honor Flight Program. Half a century later, we’ve made a start to the healing.”

Published by Page Publishing, Douglas Schanzenbach’s engrossing book is an emotional journey into the heart of a soldier.

Readers who wish to experience this evocative work can purchase “Vietnam: My Long Journey Home” at bookstores everywhere, or online at the Apple iTunes store, Amazon, Google Play, or Barnes and Noble.