Recent release “Tarnished Hero” from Page Publishing author Dr. Daniel Schultz is the compelling biography of a man whose life is known only in bits and pieces, and often associated with scandal. Dr. Schultz’s book sheds light on the social and political context in which James Mark Sullivan lived and offers a full understanding of the man, his work, and his times. 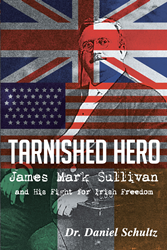 Dr. Daniel Schultz, a professor emeritus at Cayuga Community College in Auburn, New York who has been honored with the prestigious Chancellor’s Award for Excellence in both teaching and scholarship, has completed his new book “Tarnished Hero”: a fascinating and scholarly work utilizing a myriad of primary sources to shed light on the life of a man who worked tirelessly to achieve material success in his adopted country and help achieve independence for Ireland.

Dr. Schultz writes, “James Mark Sullivan was part of the post-famine Irish immigration to the United States in the late 19th century. Overcoming family misfortune, he moved from newsboy to journalist to Yale-educated lawyer. Relocating to New York City, his association with Tammany Hall involved him in the "Crime of the Century" Becker-Rosenthal murder case, a role not previously explored. Sullivan's involvement won him a patronage appointment as ambassador to Santo Domingo. Scandals about graft and corruption forced his resignation. However, another factor which contributed to his dismissal, unexplained until now, was his effort at subversion of his government's policy of neutrality, which was connected to his ties to Irish nationalism. He later established the first indigenous Irish film company with a pronounced Nationalist agenda, making several films that are now classics of the silent film era. Following the death of his wife and son during the influenza epidemic of 1918, he returned to the United States. Failing to revive his legal career, he removed to Florida, dying in relative obscurity.”

Published by New York City-based Page Publishing, Dr. Daniel Schultz’s illuminating book is a must-read for anyone interested in Irish history and the impact of Irish immigrants both in America and in their native land.

Readers who wish to experience this compelling work can purchase “Tarnished Hero” at bookstores everywhere, or online at the Apple iTunes store, Amazon, Google Play, or Barnes and Noble.