In ‘Code Name: Arc Angel,’ an ordinary American citizen turned spy must do everything in his power to put a stop to Hitler’s destructive regime 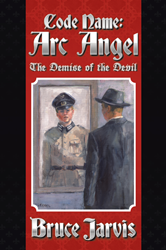 'Code Name: Arc Angel’ delivers the greatest hits of World War II wrapped up in personal narrative, with the unique addition of a German-born American hero to the World War II fictional canon.

Author Bruce Jarvis has published his exciting World War II spy thriller, “Code Name: Arc Angel,” that plunges readers into the year 1940 as Europe finds itself in crisis with Adolf Hitler leading Germany, the Italians declaring war on Great Britain and France, and the formidable Luftwaffe carrying out large-scale attacks.

The book follows Carlton Fuller – an ordinary U.S. citizen and family man – who is called upon due to his German background by the Office of Strategic Services to infiltrate the highest ranks of the Nazi Party in a daring, covert operation that could determine the outcome of the war.

Fuller assumes the identity of a Nazi Colonel who plans armed services operations and interacts with Hitler and other notorious individuals, including Heinrich Himmler, Alfred Jodl, Joseph Goebbels, and their respective staffs. As Fuller attempts to fulfill his mission by gathering military secrets for the allies, he puts everything on the line for the sake of destroying Hitler’s regime.

“In his ambitious book, Jarvis displays a masterly command of the historical period – especially impressive is his grasp of German language and culture,” a Kirkus reviewer wrote. “… In addition, the plot is as inventive as it is clever.”

Based on a true story, “Code Name: Arc Angel” twines elements of drama, romance, and espionage to deliver something for every reader while also embodying notions of duty, patriotism, and personal sacrifice.

About the author
Bruce Jarvis served in the U.S. Navy from 1956-1959 and worked for nearly three decades for AT&T before he was recruited by the Department of Defense to work for their Defense Information Systems Agency. He is also the author of “Willy Victor and 25 Knothole”. Now retired, Jarvis has three children, six grandchildren, and one great-grandson from his first marriage. He currently resides in Leland, N.C., with his second wife, Joan. To learn more, please visit http://www.codenamearcangelbrucejarvis.com.