Recent release “From Orphan to Police Officer” from Page Publishing author Duane McNeill is a roadmap of how he went from being an institutionalized child to a productive and law-abiding adult. This book shares his poignant journey, from the abandonment of both his parents to a long and illustrious career in law enforcement. 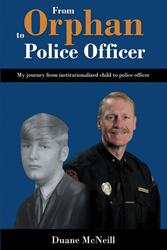 Duane McNeill, a former police officer who retired after a stellar thirty-two-year career in law enforcement and currently resides with his wife, Lidi, in Edinboro, Pennsylvania, has published his latest book “From Orphan to Police Officer”: an inspiring account of his heartbreaking early years and the life-changing opportunities afforded by an abiding faith and personal perseverance.

Duane was one of six siblings, one of two sets of twins, that were all abandoned when he was a child. He then became a ward of the Memphis, Tennessee, Juvenile Court System. As a child, he lived in a number of institutional settings: foster, group and children’s homes, shelters, and detention facilities. In the ninth and tenth grades, he attended predominantly black schools and lived at a children’s shelter. During this time of his life, while he was not a minority, he lived as one. At the age of sixteen, his Aunt Mary McNiell became his legal guardian, which kept him from being sent to a reform school.

Duane and his Aunt Mary lived in Gulfport, Mississippi. Duane attended Gulfport High School and played on the football team as a center. His senior year of high school the team was undefeated and won the state championship. Duane attended Mississippi State University on a football scholarship. He played on the offensive line and spent one year as a graduate assistant coach. He graduated with a degree in social work and a certificate in corrections.

Duane spent thirty-two years in law enforcement. Most of Duane’s law enforcement career was with the Austin Police Department in Austin, Texas. This book is about his life’s journey from being an orphan to becoming a police officer. The book was written with thanks to others in law enforcement, with hopes that they too, one day, will share their experiences with others in an effort to be sources of encouragement to each other.

Published by Page Publishing, Duane McNeill’s engrossing book is a truly inspirational autobiography illustrating the incomparable power of positivity, faith, and service to others.

Readers who wish to experience this engaging work can purchase “From Orphan to Police Officer” at bookstores everywhere, or online at the Apple iTunes store, Amazon, Google Play, or Barnes and Noble.