Author Edward Lemay’s new book “The Last Kings of Elysium” is a gripping journey through time as a jaded writer finds his creative voice in the stories of madmen.

Recent release “The Last Kings of Elysium” from Page Publishing author Edward Lemay is a vivid flight of the imagination weaving spellbinding historical fiction with the real horrors wrought by modern psychopaths. Kris Bronson’s career as a psychologist probing the motivations of society’s most vicious killers offers a stunning window into a world of monstrous fantasy. 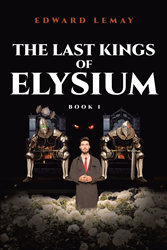 Edward Lemay, an avid fantasy fan who discovered his passion for writing in the third grade, has completed his new book “The Last Kings of Elysium”: a masterful work of fantasy fiction that invites readers on a spellbinding journey through history and mythology.

Edward writes, “Psychologist and struggling aspiring writer Kris Bronson is just an ordinary, hard-working guy. But that was the problem. He wanted more. Desperate to find the imagination he craves so badly for his own writing, he looks to the minds of the criminally insane, particularly women who seem to have survived the annals of time. What started off as a job turns into one of the most fantastical roller-coaster rides Kris would ever experience. Carried by the tales of the Trojan War, to the demise of Julius Caesar, and even a nod to the Arthurian legend of Camelot, Kris finds the imagination he has been looking for. As he sees the magic of these two seemingly insane, dangerous men go to work on his mind, the stories of worlds within our own, guarded by monstrous and magical figures, he realizes that he is doing much more than finding a cure to his writer’s block. He is being convinced that there is much more to this world than he ever realized, one that would inevitably be the end of the world as we know it by the hands of a modern-day terrorist that seems to have his own magical ties to Kris and the two men he conducts his sessions with.”

Readers who wish to experience this engaging work can purchase “The Last Kings of Elysium” at bookstores everywhere, or online at the Apple iTunes store, Amazon, Google Play, or Barnes and Noble.