Recent release “The Right Thing” from Page Publishing author Edward Schlueter is a gripping and potent drama introducing Benjamin Harris, the beloved son of a single mother who died after his accomplished grandfather abruptly vanished many years ago. When he receives a call informing him of his grandfather’s death, he is drawn into a high-stakes game of cat and mouse that changes his life forever. 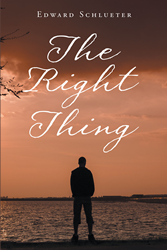 Edward Schlueter is a well-traveled ship’s engineer whose career stretched from working on board seafaring vessels to the boardrooms of international maritime shipping companies now residing with his wife, Nancy, and their black lab, Tug, in Bluffton, South Carolina. He has published his new book “The Right Thing”: a fast-paced and suspenseful story that reaches from the darkest days of the Second World War into the life of an unsuspecting young man still mourning the loss of his only family.

The call that changed Benjamin Harris’s life forever came in the middle of the night, informing him that his grandfather, who disappeared twenty-two years before, was dead. As he adored his grandfather while he was growing up, he was determined to find out more information, in hopes that he could finally understand why he suddenly and, without notice, vanished from his life.

Ben’s search for answers leads him across the country to an island near Seattle but was totally unaware that he was being drawn into a much-larger search to solve a mystery that has been ongoing for seventy-five years.

As the Second World War was coming to an end, the Nazis attempted to reposition millions of dollars in diamonds stolen from Jewish merchants throughout Europe to their agents in Argentina. The box carrying the stones disappeared en route and has been missing ever since. Many people have been hunting for the hidden diamonds, claiming that they have a right to the stolen treasure for themselves while others have been hunting to find them and return the diamonds to the victims of the crimes.

An agent of the Israeli government meets Ben, and together, as allies, find answers to both mysteries in a suspense-filled, dangerous journey leading them across international borders, in their desire to do the right thing.

Published by Page Publishing, Edward Schlueter’s engrossing book is a compelling story that keeps the pages turning until the thrilling conclusion.
Readers who wish to experience this engaging work can purchase “The Right Thing” at bookstores everywhere, or online at the Apple iTunes store, Amazon, Google Play, or Barnes and Noble.