Recent release “The Fall of Marco Bentley: Pride Goeth” from Page Publishing author Ernest Keegan is a fast-paced and suspenseful tale introducing a group of boxing professionals who are left reeling by the apparent drugging of a well-known trainer whose champion fighter exhibited signs of foul play in his stunning loss to an up-and-coming middleweight talent. 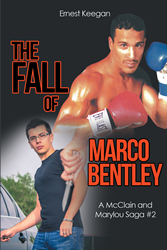 Ernest Keegan is a Pittsburgh native, former amateur boxer, and US Air Force veteran who has been married to his wife, Carole, for forty-four years. He has published his latest book “The Fall of Marco Bentley: Pride Goeth”: a riveting page-turner that keeps the reader guessing until the shocking conclusion.

Longtime friend of Dan McClain and Marylou Caponi, elderly boxing trainer Cherry Red lay in a coma in a trauma unit at St. Margret’s Memorial Hospital due to an overdose of a depressant drug. It happens to be the same drug found in the bloodstream of his fighter and now ex-champion Marco Bentley at the post-fight urine tests.

The State Boxing Commission now is investigating who, why, and how the drug was administered.

The champion had faded badly in the late rounds, totally uncharacteristic for the dynamic young champion. A fighter drugged? Sure. It’s happened. The trainer, that’s a totally whole other ball game.

Who and why? What did he know about it?

The winds of suspicion blow hot and heavy toward Dan and Marylou because the new middleweight champion of the world just happens to be their own fighter, Jake Conley, now waiting in limbo for the commission’s decision.

The loss of his title seems to be the least of Marco’s problems. Betting heavily on himself has put him in a deep hole with the wrong people.

Did the fact that Marco suddenly without explanation dropped Cherry Red as his lifelong manager just days before the fight bear on the situation?

Dan and Marylou want answers of their own. Dan McClain doesn’t care what he has to do to get the answers.

Readers who wish to experience this engaging work can purchase “The Fall of Marco Bentley: Pride Goeth” at bookstores everywhere, or online at the Apple iTunes store, Amazon, Google Play, or Barnes and Noble.