Recent release “ARTHURIAD” from Page Publishing author Frank Salvidio is a stirring poetic narrative in the form of dramatic monologues by all those who played roles in the unsuccessful efforts of King Arthur and the Knights of the Round Table to establish a kingdom based on honor, brotherhood, and the principles of Christianity. 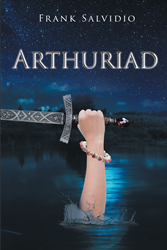 Frank Salvidio, a 2014 Nemerov Sonnet Award finalist, is a retired English professor whose poetry has appeared in numerous journals and anthologies. He has published his latest book, “ARTHURIAD,” an evocative poetic saga offering a vivid portrait of the human fallibility that compromised King Arthur’s aspirations for a spiritually-ideal kingdom.

The legend of King Arthur has been part of the literary fabric of Western culture since at least the time of the early sixth-century Welsh poet Aneirin—principally through Geoffrey of Monmouth’s early twelfth-century “Historia Britainum,” the late twelfth-century romances of Chretien de Troyes, Sir Thomas Mallory’s “Le Morte d’ Arthur” (fifteenth century), Tennyson’s “Idylls of the King,” and more recently, in America at least, the narrative poems of Edwin Arlington Robinson and Lerner and Loewe’s “Camelot,” with its emphasis on the illicit love affair of Lancelot and Guenevere. Indeed, so prominent has the legend of King Arthur been in Western culture that before he turned to the Bible to write “Paradise Lost,” John Milton is said to have considered the Arthurian legend as the subject of an epic poem about the journey of the English people into Christianity.

Now, in his “ARTHURIAD,” award-winning poet Frank Salvidio retells the story of the internecine rivalries that culminated in the tragic end of Arthur’s attempt to found an ideal kingdom based on Christian principles and protected by a brotherhood of Christian warriors—the Knights of the Round Table. The Arthuriad tells the story in a series of dramatic monologues in which all the “dramatis personae” offer self-revealing recollections of the part each played in the tragedy of Arthur’s failed attempt to establish Christian civilization in a pagan world. What emerges is the story of unrestrained human passions undermining the spiritual aspirations on which Arthur sought to establish his ideal kingdom.

Published by Page Publishing, Frank Salvidio’s engrossing book is a compelling read for anyone prone to the timeless fascination of Arthurian legend.

Readers who wish to experience this engaging work can purchase “ARTHURIAD” at bookstores everywhere, or online at the Apple iTunes store, Amazon, Google Play, or Barnes and Noble.